‘Towards The Imo of Our Collective Dreams’; An APGA perspective by Chief Okeke

Being a presentation by Hon Anthony Amechi Okeke, Ezekwueche Aguleri, Coordinator, Soludo Support Group ( SSG), Lagos State chapter, on the occasion of The Doable Team 2023 Critical Stakeholders Canvass; themed: “Towards The Imo of Our Collective Dreams.

The Chairman,
The Double Team, 2023 Critical Stakeholders Canvass
The Doable Team Diaspora President and members,
The Planning Committee of this event,
The Chief Host and Royal father of the day,
Ladies and Gentlemen,

I am the President of Mandilas United Traders Association (MUTA), Lagos International Trade Fair complex, and Coordinator, Soludo Support Group ( SSG) Lagos State chapter.
No doubt, am a strong Apostle of Prof Charles Chukwuma Soludo and an APGA stalwart.
My humble self; Ezekwueche Aguleri, Chief Anthony Amechi Okeke, though in a short notice to make this presentation, is moved by the theme: Towards “The Imo Of Our Collective Dream” (Oganiru Nke Imo Ebum N’uche Anyi Nile).
I welcome all the stakeholders’ gathered here today to chart a sustainable political future of Imo State; The Eastern Heartland, ahead of 2023.
First of all, I think it is very apt to review the current state of political affairs in the state since after the 2019 elections.
When the PDP was first in office for about eight months, there seemed to be a tiny ray of hope following few development strides by the brief Governor, Rt. Hon. Emeka Ihedioha.
However, the Supreme Court ruling removed PDP administration and ushered in the APC with Senator Hope Uzodinma as Governor till date.
Even though the Hope Uzodinma administration, who received the probe report of Ihedioha on loots in the state seems to be implementing it, the spate of insecurity in the state has never gotten to this level since the creation of the state. This is based on media reports in the last couple of months.
Aside insecurity, development schemes and programmes that impact positively on the citizenry seem to be inadequate or nowhere to be found.
Facts on ground showed that visible infrastructural projects are concentrated within Owerri even as Orlu and Okigwe zones yawn for government presence till date. 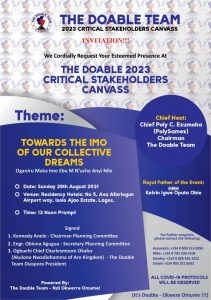 It is important to recall that Imo State had since 1999, tested the PDP, PPA, brief APGA government under Senator Okorocha before he decamped to APC. Amongst all these tests, APGA under Senator Okorocha seemed to be the shortest in duration according to history.
Now, taking a strategic look at the unprecedented deliveries of APGA as a political party in Anambra State in the last couple of years, one cannot but recommend a change of leadership in Imo to APGA come 2023.
Since the coming in of APGA in Anambra State,
1, the state had known peace.
2, the state has known sustainable rural and urban development,
3, Anambra has seen growth in its economy, 4, Anambra has remained a development measuring yardstick for several states in the federation.
If I may continue to count developments in Anambra that should convince Imo stakeholders to vote in APGA, we may not leave here today.
In the political history of Nigeria, it is very hard to detach Anambra form Imo and that is why it is important for Imo to align with Anambra to deepen development in the southeast.
We are all aware that Anambra and Imo states were created same day and while from Anambra Enugu State was carved out, from Imo, Abia was born even as Abia and Enugu contributed towns to make up present day Ebonyi State.
Ndigbo all over the world are known for emulating exemplary leadership wherever they see it. From all indications, APGA in Anambra has demonstrated exemplary leadership right from the administration Mr. Peter Obi to the present administration of close brother, Chief Willie Obiano.
Yes! It is doable. The Imo of our collective dreams is possible only via APGA government it can come in Imo because it came to Anambra State from APGA.
What are these our dreams?
Our dreams in state governance just as Prof Chukwuma Soludo, the APGA flag-bearer in the November election in Anambra has put it; is a leadership that feels the impulse of the people and channels development programmes in a way and manner that equity, fairness and justice remain the order of the day.
That is why the long standing belief of APGA has remained “Onye aghala Nwanneya”. We in APGA shall continue to stand on this well accepted belief and political lifestyle.

My good friends of Ndimo, am here today to join you in working out modalities that will lead to the actualization of that our collective dreams in the state though the coming in of APGA government.
Yes, 2023 looked far, but I want to tell you that it is here with us. The earlier we begin to articulate strategies, the better for us.
I want to urge the members of the committee that organised this event not to relent after today, but to build on the political calculations, observations; ideas and strategies that will be developed from this gathering today for the interest of taking over the governance of Imo State come 2023.
We would want our brothers and sisters from Imo to understudy governance in Anambra to truly understand how APGA works deeply into the fabrics of the society for the sole purpose of aggregate urban and rural development.
I would not conclude this presentation without advising our Imo brothers and sisters in APGA to kickoff grassroot mobilization of party members and institute strong party base in every community and local government.
Again, as a politician, I want to tactically reveal to APGA members in Imo State that this is time to build up the party at the grassroot considering the high level of anger and insecurity which are good reasons to convince anybody that our party will salvage the already ugly political situation.
I want to appreciate the political intelligence of ‘The Doable Team’, who are powering today’s event.
As a politician, I want to tell you that you have started well and on time. Never relent.
In Robert Greene’s 48 Laws of Power, he said in law 6; and I appeal to quote “Court Attention At All Cost”. Otherwise, this is time to get the political attention of all registered voters in Imo State through a house-to-house visitation with the APGA party manifesto. 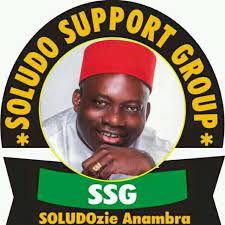 Also, you need to follow the dictates of Law 28 which say and I quote “Enter Action With Boldness”, approach Imo voters with the required boldness and make them to understand that after testing almost all leading political parties in Nigeria, APGA remains the best bet in quality and sustainable state governance come 2023.
To The Doable Team, try and adopt Law 44; This law particularly remains the game changer in politics if you must win an election. It says and i quote “Work On The Hearts And Minds Of Others”.
This is time to change the political mindset of Imo voters with the manifestos of our great party, APGA as we approach 2023.
Thank you for listening.
Imo State must rise again.
APGA remains the magic wand.