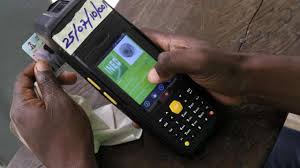 At the continued daily press briefing of the Independent National Electoral Commission (INEC) on Wednesday in Abuja, the chairman, Prof Mahmood Yakubu has out rightly ruled out chances of having it systems hacked by any technology considering the fact they work largely offline.
However, he tactically avoided the key subject of the question put to him by the TVC correspondent, Muyiwa Akanbi on accusations and counter-accusations trailing alleged deployment of Chinese jamming technologies designed to frustrate speedy performance of Card Readers on election day in some regions by a named political party.
Jammers are smart technologies that are designed to disrupt the performance of any frequency driven device within the radius of its deployment.
Business Hilights recalls that the presidential candidate of the People’s Democratic Party (PDP), Atiku Abubakar, had on Tuesday traded tackles on alleged manipulation of card readers deployed to some geo-political zones for Saturday’s presidential and National Assembly elections with the ruling All Progressive Congress (APC).
Atiku alleged at the 84th emergency meeting of the PDP National Executive Council in Abuja, that the APC has brought in China-trained operatives who will slow down card readers in PDP strongholds but will hasten the speed of card readers in Buhari’s strongholds; to allow for more voters.
According to him, “We have just discovered that the APC has hired many of their operatives and have taken them to China to be trained, and they have been so trained. They are back, and they are equipped with devices that are meant to slow or fasten our card readers
“So, if you are in the South South, South East and North Central, you are likely to get your card readers to be slowed by those APC operatives.
“If you are from the North West or North East, the tendency is that they will use these machines to fast-track the readings of your card readers so that many of their supporters can vote while disenfranchising the other three zones,” Atiku alleged.
However, in a swift response, the APC dismissed Atiku’s allegation as “it is illogical that a party that is in a contest with clear, superior numerical support would shut down communication on election day.”
In a statement signed by the APC National Publicity Secretary, Mallam Lanre Issa-Onilu, Tuesday, the party alleged that the PDP “has no plans to win the elections through legitimate votes, but through illegally-procured votes.
“Again, in the aftermath of the configured card readers recently recovered from PDP agents in some states, Atiku has gone to town with face-saving conspiracies that the APC has imported slow-working card readers from China.
Business Hilights had an international Skype chat with an Indian expert on jamming technology. An exclusive detail of the interview comes up tomorrow. Stay connected.

Nigeria to earn over $3.5bn from Gas flare commercialisation scheme—Derefaka

Quote from Bayelsa guber judgment review that favours Ihedioha, but…

Just in: Ramaphosa orders immediate repatriation of citizens from China

Imo: While we wait for Supreme Court review of its judgement

Before you kill Ihedioha…