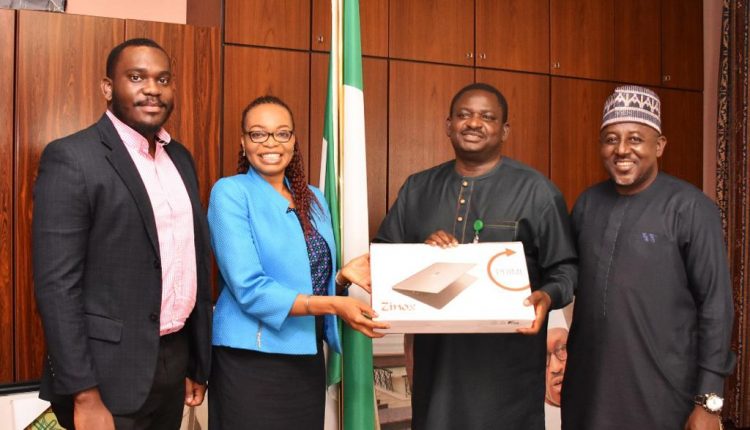 The Presidency has hailed the landmark strides of Zinox Technologies Ltd., a foremost indigenous technology giant, describing the company as Nigeria’s technology behemoth.

This was disclosed by Femi Adesina, Special Adviser on Media and Publicity to President Muhammadu Buhari.

The remarks come as the Presidency hosted the Managing Director, Zinox, Mrs. Kelechi Eze-Okonta who was accompanied by the company’s Research and Development Manager, Onochie Eche Chukwuma and Special Adviser on Political Affairs to the Nasarawa State Governor, Hon. Dikko Mohammed at the State House, Presidential Villa, Abuja on Wednesday, October 7, 2020. Adesina, who seized the opportunity to address the current administration’s drive to promote and enthrone local content, showered encomiums on Zinox, which he hailed as the pride of Nigeria.

Specifically, the Presidential aide referenced the Executive Order No. 5 signed by President Muhammadu Buhari on February 2, 2018 which mandated all Ministries, Departments and Agencies (MDAs) of government to give preference to Nigerian companies and firms in the award of contracts, in line with the Public Procurement Act, 2007; as well as engage indigenous professionals in the planning, design and execution of national security projects and maximise in-country capacity in all contracts and transactions with science, engineering and technology components.

He noted that this, among other policies and initiatives by the Buhari administration, were designed to empower indigenous capacities in the technology sector as well as promote ease of doing business in Nigeria.

In addition, Adesina, who was presented with a Zinox GTX laptop, expressed his delight with the device, even as he praised the management of Zinox.

‘‘Kelechi Eze-Okonta is a repository of the history and capacities of Zinox. She is in her elements when she talks technology, and what her company brings to the table, and still has up its sleeves. The MD was accompanied by Onochie-Eche Chukwuma, Manager, Research and Development, and Hon Dikko Mohammed.

‘‘And when you receive such ‘techy’ guests, they usually don’t come empty handed. They brought a sleek Zinox laptop computer,’’ he said.

Also speaking during the meeting, Mrs. Eze-Okonta, who traced the history of Zinox’s many pioneering feats in the Nigerian technology ecosystem, provided rich insights into the company’s exciting trajectory from an indigenous computer manufacturing giant to its current status as an integrated technology and solutions powerhouse. She disclosed that Zinox has shown strength from a global standpoint, as evident in the confidence shown by renowned multinationals such as Shell, Chevron which relies on it for its workstation deployments; as well as the European Union (EU) which recently attested to the authenticity of the brand by adopting the Zinox Elite Laptop as the device of choice for the support of immunization/Vaccination Governance in Nigeria (EU-SIGN) project.

Furthermore, she affirmed that Zinox remains in the forefront of bridging the gap to new and emerging technologies such as Artificial Intelligence, Virtual Learning and Robotics, among others, for millions of Nigerians. In addition, she revealed that the company is presently responding to the yearnings of its growing customers, having diversified into other new verticals such as alternative power solutions, lifestyle and smart home appliances, to name a few.

The Zinox MD further called on the Federal Government to extend more support to local players in the technology support, noting that Zinox and other indigenous companies have proven that they have all it takes to compete favourably with other foreign brands in the marketplace.