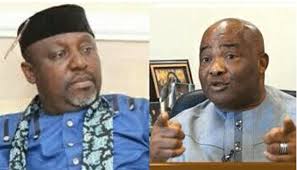 At a time the former Imo State Governor and current Senator representing Orlu Senatorial District, Chief Rochas Okorocha is visiting former presidents as a way of perfecting his strategies to clinch the 2023 presidential election, back home, the Imo State Housing Corporation has revoked 49 plots of land belonging to Jessdean Ventures Limited. of No. 3 Okeoma close Tran Egbu Layout said to be owned by Mrs. Geraldine Obinali, Okorocha’s sister.
Recall that Senator Okorocha recently addressed some youths in Abuja after visiting former President Olusegun Obasanjo on his 2023 presidential bid.
Business Hilights gathered that Geraldine Obinali is the elder sister of former Governor of the state, Senator Rochas Okorocha.
The revocation is contained in a statement signed on Monday, by the General Manager/Chief Executive Officer of the state Housing Corporation, Mr. Chinedu Mbakwe-Obi, and media aide to the General Manager, Enwerem Prince.
The statement further disclosed that the revoked plots of the land in Redemption Estate Phase III were issued to Geraldine Obinali (nee Okorocha) for the sole purpose of providing infrastructural facilities which was never carried out.
The corporation directed anyone who had transacted business on any of the plots of land to approach it for ratification.
The statement reads, “Sequel to all legal actions taken to notify Jessdean Ventures Ltd of No 3 Okeoma close Trans Egbu Layout Owerri owned by Geraldine Obinali, we hereby revoke the following plots numbers in Redemption Housing Estate Phase III issued to her for the sole purpose of providing infrastructural facilities in the estate which was never carried out.
“Below are some of the affected plots numbers: RHE III/258,424, 425,422,420,419, 418, 417, 416, 415,414, 403, 421,244,244A and 245 among others.
“This notice, the general public is hereby being notified that if anybody had transacted on any of the above-numbered plots, they are to immediately come to the Imo state Housing Corporation with original papers for ratification.
“Imo State Housing Corporation will continue to ensure that the desires of the Governor Hope Uzodimma in providing affordable housing to Imo people will be adhered to without delay”.

NPA clamps down on illegal jetty and barge operators

Zungeru hydro power station ready for concesssioning, others on the line