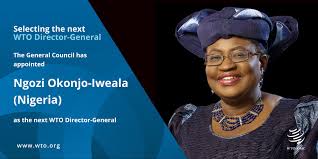 Before you become too hard on yourself or on your children, know this:
Stop comparing ladies that you know (or grow up with) to Dr (Mrs) Ngozi Okonjo-Iweala.
Her dad was a professor and a king.
They’ve always been rich.
She was just 22 when she finished from Harvard University. You know how expensive Harvard is, right?
She was 27 when she earned her PhD, from the Massachusetts Institute of Technology.
Recall, she worked at World Bank for 25 years, rising to the position of Managing Director. No, it would be unfair to measure your seriousness in life by that woman’s standard.
Her brilliance is motivating, but her circumstances are different, Fact!
Otherwise, the developed world that wanted her for the job of WTO are not just looking for any woman for the job but ‘an Ngozi’.
If you’ve also had the same parent, you would’ve probably done better.
Most times, people aren’t reduced to riffraff and socioeconomic passersby because they’re lazy or stupid, poverty and powerlessness are just merciless conditioners, that’s all.
When you don’t have money, there’s only so much you could do, in the way of chasing dreams. Your exposure level would be low, and when it’s low, your ambitions would be accordingly small.
Now when someone with exposure and big ambitions sees you, he sees someone who’s not serious enough, or brilliant enough. But you are! You’re a royal material only raised in the culture of slaves. Life has been unfair to you.
Now what do you do? Do what the rest of us are doing. Begin to live deliberately. Seek exposure and nurse lofty ambitions. We can also be great too. We’ll not settle for less.
People often name successful people across the world to power their motivational talks, that if we work hard too, we can be successful. It’s true.
If we work hard, we can also be successful. I just want you to know, however, that if you’re not as successful as these people eventually, don’t beat yourself up. It’s all lies that they started from nothing. Mark Zuckerberg, Barack Obama, Elon Musk, Bill Gates, Dangote, Femi Otedola, and so on… their parents weren’t poor. They’re hardworking, right, but they didn’t start from ‘nothing’. Being hardworking alone isn’t enough. It never is. It never will be. Be hardworking all you want, if you’re not in the right neighbourhood with the right exposure, it’s all bananas and slippery floors.
May God bless our hustles. We’ll not come to this world to be useless by His grace.

Leading brands set to compete on Konga this month end

Let’s give peace a chance in Imo—Ekeh, Zinox boss