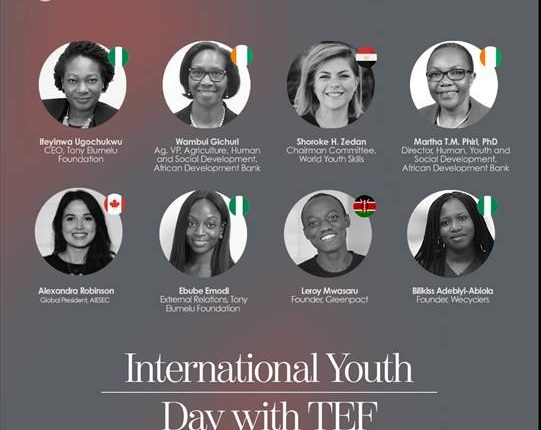 The Tony Elumelu Foundation (TEF) last week, joined the United Nations and other global organisations to mark the International Youth Day, with a line-up of pan-African speakers discussing the theme, “Investing in Africa’s Future: Youth Empowerment through Entrepreneurship”.

Moderated by TEF CEO, Ifeyinwa Ugochukwu, the event featured a line-up of pan-African entrepreneurs and speakers from the development sector.

Addressing the audience, Ifeyinwa Ugochukwu drew attention to the plight of startup African entrepreneurs during the pandemic while highlighting the importance of SMEs, especially during this period. “The SMEs are the major contributors to African economies. We must not underestimate the level of disruption and uncertainty that young people all over the world have faced as a result of the COVID-19 pandemic in Africa.”

Ifeyinwa emphasized the need to empower the youth to tackle the menace of poverty on the continent.

Wambui Gichuri, Ag. VP Agriculture, Human, and Social Development, African Development Bank stated: “Entrepreneurship is an essential part of Africa’s employment challenge and it is where we have to put our focus as a multilateral development bank”.

She added: “We need to do whatever it takes to empower our youth because they are the future of the continent”.

Martha T.M. Phiri, PhD, Director, Human, Youth and Social Development, African Development Bank, stated that the $5million partnership between the African Development Bank (AfDB) and the Tony Elumelu Foundation in 2019 to empower additional young African entrepreneurs, was a step in the right direction to create jobs on the continent. “That was a very exciting partnership and we feel this should be the way forward if we are going to create jobs on the continent,” she said.

Shoroke H. Zedan, Chairman, World Youth Skills, Egypt said: “It is important that governments start looking at entrepreneurship as a fundamental core topic that needs to be integrated into the educational system”.

Speaking on incorporating the youth into policymaking decisions, the Global President, AISEC, Alexandra Robinson stated: “I advocate for any policy that involves young people as co-owners of the policymaking process. I really believe that when young people are given co-ownership of the table, not just invited to someone else’s, they are able to have those meaningful conversations”.

Speaking as an entrepreneur doing business on the continent, Leroy Mwasaru, Founder, Greenpact Kenya and an alumnus of the Tony Elumelu Foundation’s flagship Entrepreneurship Programme highlighted the need for transparency to attract more investors: “It is as a result of sharing what we have been doing that we hope there are less failures and more successes”.

Earlier in the year, due to the pandemic, the Tony Elumelu Foundation announced the postponement of its flagship TEF Entrepreneurship Programme and TEF Forum, the largest gathering of African entrepreneurs on the continent. Celebrating its 10th year anniversary later in 2020, the Foundation counts over 9,000 young African countries across all 54 African countries as beneficiaries and alumni of its Entrepreneurship Programme. It continues to support African entrepreneurs with expert-led masterclasses, business management training and market linkages on its digital networking platform, TEFConnect.