TB Joshua at 55, opens up on evil attacks prior to, after his birth in Ondo State 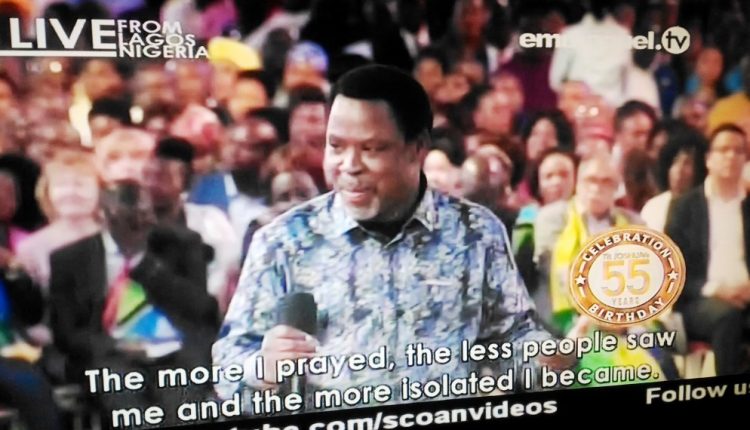 …Attended six secondary schools in Lagos in less than one year

SCOAN is located at Ikotu Egbe in Alimosho Local Government Area of Lagos State while the prophet is an indigene of Ondo State, South West Nigeria.

The elated preacher, who will turn 55 on June 12 (Tuesday), advised the global community to always be focused on their respective life journey and see their threatening life challenges as a preparatory build up for their successful future.

Explaining more during the Live Sunday Service transmission to celebrate his 55th birthday monitored by Business Hilights in Lagos, the prophet admonished the faithfuls, saying “What you are going through today, you will not see it tomorrow”.

“I could not resist that force. As am standing now, there is a force I cannot resist which God is behind.

I cannot resist telling you. Each time I try going wrong, it will say to me; no, no, no!

Its still the same strong and mighty force that kept telling me “Concentrate on your future”.

“Concentrate on your future; what you are going through is a bridge and preparation to your future. I prayed the more the more I pray, the less people will see me and the more isolated I become.

This affected all of my social life. In those days, my colleagues and friends around complain that I am not social and civilized like them. That was their complaints. That kept me isolated.

In this way, mistake becomes an incentive that drove me closer to God instead of otherwise.

“Tell your neighbor. If you make a mistake don’t run from God, run to him.

Wrong became an incentive that drew me closer to God.

What are you going through?

You just need to know this like I told you. There was a force I could not resist. The voice kept telling me; concentrate on your future because the situation you are in now, may not be found tomorrow. It’s a preparation for your future.

“Once again, happy birthday in advance!

I was a baby before the death of my father.

Little baby before the death of father.

Consequently, I knew nothing about my late father. And the entire family burden rested squarely on the shoulders of my mother.

I want to pay a special tribute to my late mother who always advises me to look into my love work. Failing to do so can shut down our relationship with God. I salute her.

What a wonderful woman!

Don’t forget, prayer from heart is spirit prayer that leads to dream and revelation. That really helped greatly. I often dreamt where I was always thought the scriptures till now. That gave me an edge over.

I was the smallest boy in my class, but always lead in class prayers. My teacher and colleagues always call me small pastor.

In human life, many things could cause one stop between steps.

We don’t have enough time today, but I will

When I mean epileptic fit, I mean today am in school, the next day out. I was very very smart, brilliant! But the race is beyond me.

“I attended six colleges in less than one year.

My first college was Ansarudeen Grammar School, Ikare (AUD). From there I left village to Lagos in a mysterious way which I will share with you when am 60 years.

“Because I know you keep asking yourself why now this man is showing all these records?

Yes now at 55, I have started, on sixty, another record. I will keep so many and will show you just 10 per cent of those records today.

Are you ready to watch?

“Yes I began my college at Ansarudeen Grammar School, Ikare (AUD) in a mysterious way. I was one of the late entries or admission to the school and that is why my class was ‘E’.

Classes usually stops at C or D, but late admission led to the creation of class E.

“I spent nine months at AUD and left mysteriously to Lagos.

When I came to Lagos, the first college was Metropolitan College, Isolo. I was there for three months.

I left to New State High School, Palm Avenue, and spent one month there.

From there, you see in Ikotu here, there is a College at Ilewe; we were the first set of students there. Muslim College we call it. I spent three months there. All these less than one year.

I was moving from place to place and the reason is beyond me.

It was a watch night that saw me and rescued me. He placed at his duty post till morning and took me to the school authority to explain.

While explaining, I was half-balanced and as such I could not continue my education and I went back to my mother.

“With my mother at home, I spent another two years at home.

That is one. I will not able to tell you the other because of time. At 60, I will share with you.

I attended six colleges in less than one year.

You know I told you that whatever you are going through now, may not be found tomorrow because it’s a preparation for your future. Tell your neighbor!

Whatever you are going through or facing, may not be found tomorrow because it is a preparation to link you to your future.

Now I want to begin to show you some records.

“Let me start from my birth. The record am about to show you “is not saying I have arrived”, but to encourage the weak, and those without fast legs. Those without human help; that there is hope and Jesus is the hope.

I stayed in my mother’s womb for 15 months. At nine months, my mother was moving from one medical centre to another because she was having labour.

“From the ninth month, my mother began to have labour and she was moving from one hospital, medical centre to another hospital. Until she was carried to a place called Egbe Medical Centre.

That Egbe Hospital seems to be the best hospital within the area and if not one of the best in Nigeria.

“Yes! When I was delivered and was about to be named seven days after birth, arrangements were made for the naming ceremony. Many guests and people were turning up and what to see the child that spent 15 months in his mother’s womb. You can imagine the number of people present.

“In our village, there are so much rocks and there are quarries that blast rocks. They blast the rocks so as to get water.

It became a daily habit that they have to blast to get the water from the ground.

Along the road, opposite the house I was to be named, there was a company blasting rocks there.

“While blasting, suddenly, (a very big stone, you cannot imagine, the stone is here with me), flew across the road, scattered the zinc covering the house I was kept with my mother and landed on the exact net I was sleeping with my mother.

“No one knows how the baby Joshua moved from the net to the other side of the room.

And what happened to the mother?

The mother fainted and went into coma. And she was carried to the hospital.

“The guests and all other people waiting for ceremony, out of share wonder and surprise, voicing different names including Temitope, Tope, Temidire, Temiloluwa, Temidayo, TemiThis, Temithat, different names. Finally, they decided to choose Temitope.

It was the guests and people around that voiced out the name which I bear today.

“Like I said, other records will be unveiled at my 60th birthday.

However, after airing a documentary on the birth place of Prophet TB Joshua, he made it clear that the essence of the documentary is not to show that we have arrived but an as encouragement for the weak and downtrodden to see and have the needed courage to pass through whatever situation he or she finds himself right now.

Prophet Joshua averred that “My story is not to show that we have arrived, but to tell those without fast legs, without human help, the underprivileged, that there is hope, and JESUS is the Hope!”

A Nigerian, Onoruoiza was one of 176 Ukrainian air crash victims in Iraq

FYI: January to November total LGA allocations in 2019 at a glance