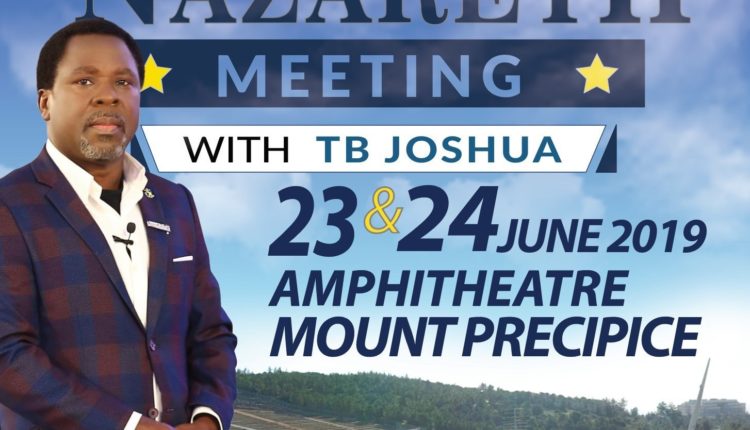 Penultimate Sunday and Monday were agog in the City of Nazareth, Israel as leading Nigerian pastor, TB Joshua, held a two-day powered packed international meeting with followers from over 100 countries at the amphitheatre of Mount Precipice located on the outstretch of Nazareth.
The healing and deliverance crusade tagged ‘Nazareth Meeting with TB Joshua,’ was hosted at the hitherto abandoned and dilapidated Mount Precipice amphitheatre, located outside the southern edge of the ancient city of Nazareth.
However, the amphitheatre was wearing a new look during the two-day meeting (June 23 and 24, 2019).
Revealing the historical background for the Nazareth meeting on Day 2 of the crusade, Prophet disclosed that when he visited Israeli in 2017, he toured the place in company of the Mayor of Nazareth, Ali Salam, where he pledged to renovate the bushy and abandoned tourism facility including the administrative building of the amphitheatre.
Responding, during the tour with TB Joshua, Salam said “What a blessing with you; Prophet TB Joshua.”

Continuing in appreciation of the Prophet’s pledge to renovate the amphitheatre, Salam averred in 2017 that “We can’t wait to have you for a revival in Nazareth. We are ready”.
Recall that it was shortly after his return from Israel in 2017 that the globally trended news of his move to relocate to Israel emerged. However, up till now, the Prophet never at any time, made his mind clear on whether to remain in Nigeria or truly relocate to Israel.
Besides, it is on record that it was Business Hilights that first broke the news of his possible relocation to Israel and what Nigeria stands to lose in the process after all; https://businesshilights.com.ng/what-nigeriall-lose-if-tj-joshua-yields-to-israeli-calls-to-relocate-to-galilee-in-israel/
The national and international strategic importance of the breaking news which went viral encouraged Prophet TB Joshua to call the publisher, Prince Stan Okenwa, on phone and after about few minutes discussion, he officially invited him to the Synagogue for talks which was held less than one week after the viral story.
It would be recalled that within the period of the trending story, the former Minister of Information, Culture and Tourism, Alhaji Lai Mohammed were among major stakeholders that intervened against the relocation move.
However, with the latest move which involved pulling resources in foreign currencies by global Emmanuel TV Partners, analysts have started reading strategic meanings into the Nazareth international meeting.
Already, several observers, who spoke to Business Hilights on the matter argue that for the Prophet to arrive at the conclusion to renovate the age-long abandoned amphitheatre to international standard alongside the complex’s administrative building which was equally in tartars, the chances of either relocating to Israel or hosting a yearly meeting there are becoming clear.
Though efforts to get Israeli Visa conditions relating to every part of the world failed at press time, tourism pundits say, Israel may have raked in massive foreign exchange considering the fact visitors in their thousands from more than 100 countries were at the two-day meeting.

Besides, within the period of the meeting, the economy of Nazareth Municipality jumped as hotels were agog with international tourists even as local operators in the transport sector smiled to the banks.
On the other hand, it would be recalled that in his valedictory comments on Day-2, Prophet Joshua thanked the body of Christian leaders, but tactically squeezed in a clause that suggested mild differences with them.
Observers who reviewed the clause are divided as to whether it translates to opposition to his style of worship which may further translate to warning signals that he may not have field day in the event of his possible relocation of the Synagogue Church of All Nations (SCOAN) to Israel as earlier speculated after all.
The analysts’ view is further supported by the fact that no Israeli church leader attended or spoke at the two-day meeting in Nazareth.

Whereas Prophet TB Joshua was silent on chances of another meeting at the venue either this year or next, he was quick to reveal that arrangements have been concluded for another Revival in Paris sooner. Recall that on June, 1, 2019, he held a Revival in Sheffield, UK.
Further investigations on the religious significance of Mount Precipice showed among other things that the mountain has made history and has also seen history being made.
The Mount Precipice amphitheatre, renovated and donated to the town by Prophet TB Joshua and his Emmanuel TV partners, has a capacity of 40,000.
The mountain is known as the leaping mountain.
Precipice can be said to be rising above the southern part of the Nazareth Mountain with 397 meters. Looking out over Nazareth is Mountain Tabor (where Deborah and his fearing brother, Gideon fought and won the Canaanites and their Army commander, Sisera).
Also, the Yizrael valley at the foot of Mount Precipice.

Business Hilights further gathered that Mountain of Precipice is also known as “The leaping mountain” due to the biblical history an old tradition that, Jesus jumped from this mountain when fleeting his pursuers, otherwise, the irate mob.
At the foot of the mountain is the “oafzer” Cave where Neolithic remains were found (7000 – 10000 B.C) into the remains of the mosterian period (80000 – 10000 years ago).

Outgoing Commission heads to hand over today in Owerri

Chevron, Shell, others deepen use of robotics in challenging environments

Just in: Daily Graphic update on COVID-19 in Nigeria

Treating coronavirus with Chloroquine has no evidential proof—Ghana medical chief