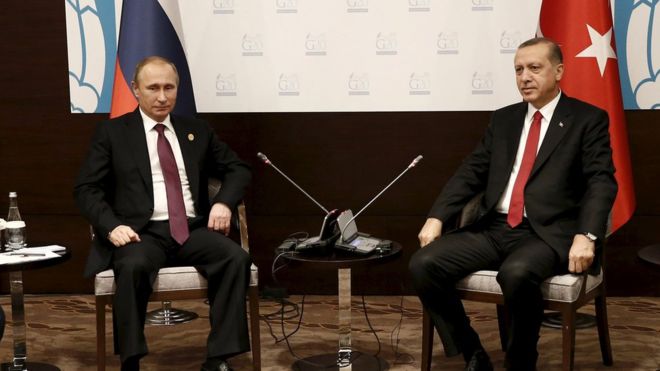 At a time Nigeria is preparing to diversify its energy mix, with the inclusion of Nuclear energy to its electricity grid, Turkey, on the other hand has formally kick started construction of its maiden nuclear power plant – the Akkuyu Nuclear Power Plant.

A ceremony marking the start of construction, took place in the Turkish province of Mersin, yesterday, April 3, 2018. It was attended by Russian President, Vladimir Putin and Turkish President Recep Erdogan.

Addressing those gathered at the ceremony, President Putin said: “The first power unit of the Akkuyu nuclear power plant is expected to be launched in 2023. Thanks to the Akkuyu project, new, modern, well-paying jobs will appear in Russia and Turkey – along with the development of advanced production capacities and technology.”

According to him, “The object will use advanced engineering solutions and cost-effective and reliable technologies. The highest safety standards and the most stringent environmental regulations will be observed. I am sure that, in 2023, all of Turkey will feel returns of the energy generated at this high-tech facility.”

Earlier in his remarks, Turkish President, Recep Erdogan, said the 2023 launch of the nuclear power plant would coincide with the centenary of the Republic of Turkey. “With the commissioning of the Akkuyu nuclear power plant in 2023, Turkey will join the family of countries with nuclear power. Akkuyu will meet 10% of all our electricity needs,” he emphasized.

Explaining more, Rosatom’s Director General, Alexey Likhachev,  informed the gathering:  “Rosatom is building in Turkey a cutting edge, tried and tested generation III+ nuclear power plant featuring four power units based on the Russian VVER-1200 design which meets the world’s highest safety standards. The model we are building at Akkuyu is already being built in a series. Unit 6 of Novovoronezh NPP and unit 1 of Leningrad NPP-2, based on the same design, are already up and running, with the former in a commercial operation and the latter launched in February. The safe and efficient operation of these units underscores the reliability of our technologies.

Whereas he noted that the Akkuyu Nuclear Power Plant is the largest joint project between Russia and Turkey, he averred that “It is important to emphasize that the project is progressing according to plan in efficient cooperation with our Turkish partners.”

After their opening statements, the leaders of the two countries signed off on the start of construction work and a symbolic button was pressed to mark the pouring of the first concrete into the base of the reactor building of power unit 1 of Turkey’s first nuclear power plant.

More than 500 people attended the ceremony, including local residents, workers, schoolchildren, representatives of local government bodies, heads of participating ministries and departments, journalists, business partners, and Rosatom representatives. Also present were young Turkish graduates of Russian universities, namely those who earned their degrees just under a month ago and are expected to start work at the project company, JSC Akkuyu Nuclear, in the near future.

On the eve of the ceremony, JSC Akkuyu Nuclear, the project operator, acquired a license for nuclear power plant construction from Turkey’s Atomic Energy Agency (TAEK). In late March, the project company also received permission to build the reactor building of the first power unit of the Akkuyu plant from the administration of the Gulnar district. The pouring of the ‘first concrete’ is an important stage of the implementation process, marking the transition to full-scale construction of the Akkuyu Nuclear Power Plant, including construction of the buildings and facilities constituting its ‘nuclear island’.

Yielding bee species in Africa reside in Nigeria due to favourable climate, but…—Abbas