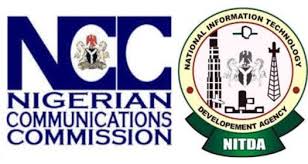 …As NCC remains mute over industry players’ petition against agency

What appears to be lack of inter-agency regulatory synergy between the Nigerian Communications Commission (NCC) and National Information Technology Development Agency (NITDA) may become the nightmare of operators in the nation’s telecoms industry if not handled with intelligence.

This is the position of industry experts who weighed the ongoing rejection of some policies recently introduced by NITDA for telecoms operators to obey.

Recall that last week, the leadership of Association of Licensed Telecommunication Operators of Nigeria (ALTON), alleged in a petition to telecoms core regulator, decrying that “NITDA is trying to usurp the regulatory functions of the NCC.”

According the memo to NCC’s Directors in charge of Enforcement and Legal Services and made available to Business Hilights, ALTON made it clear that NITDA, through the five regulatory instruments it rolled out in January, was usurping NCC’s role on data services.

The petition signed by ALTON Chairman, Engr Gbenga Adebayo averred that the framework which empowers the agency to license Public Internet Access (PIA) providers is a usurpation of the NCC function.

Adebayo also argued that NITDA’s “Framework for Data Centre Facilities”, and “Nigeria Data Protection Regulation (NDPR)”, amounted to multiple regulations that would pose a challenge in the industry.

ALTON further noted that “The key concern is that NITDA appears to be assuming the role of a parallel regulator for data services.”

Whereas the industry lead regulator, NCC currently maintains silence due to the possibility of current NITDA’s boss, Dr Isah Pantami, who had been cleared as a minister-designate, may be deployed to oversee Communications Ministry; NITDA has reacted to the petition even though the petition was not copied to it.

In its response to the petition by ALTON, NITDA warned interest groups and particularly, ALTON not to create a scenario that suggests regulatory crisis, lack of inter-agency synergy or set t government agencies regulating the sector on a collision course.

Without any official response from NCC, NITDA claimed that it enjoys a harmonious relationship with the NCC, and other regulators, but was silent on why it failed to work with NCC and those other agencies before coming up with the strange January policy for industry operators to follow.

Whereas in its defence fireworks, NITDA insisted that every one of its regulations are in the interest of the sector, and the public as a whole, industry experts stressed that unlike the NCC which usually embark on stakeholders’ engagements before introduction of policies, NITDA did not meet with any industry operator before the introduction of the embattled policy.

Giving further insights on the essence of the sudden regulatory incursion on behalf of NITDA, Head, Legal Services and Board Matters, Emmanuel Edet, said no single regulator in Nigeria has a converged mandate on ICT.

He claimed that “Various agencies have different roles to play in developing and regulating ICT in Nigeria as dictated by their mandates and enabling laws. Furthermore, no single entity is regulated by only one regulator in Nigeria. Regulators in the country work in a cooperative and complementary capacity, resolving mandate overlaps in a cooperative manner.”

Edet averred that “PIAPs include any business or other entity that provides Internet access without charge or offers a partially subsidised Internet access to members of the public. The concerns, which NITDA aims to address through this regulatory instrument, are cybersecurity and cybercrime; personal data breaches; and crime detection, prevention, and investigation.

“NITDA is enabled to address these concerns by virtue of Section 6(c) and (m) of the NITDA Act, which mandates the Agency to provide guidelines for  electronic data interchange in Nigeria, and to accelerate Internet and intranet penetration in Nigeria, and promote sound Internet governance,” NITDA official disclosed.

However, an insider in NCC, who pleaded anonymity confided in Business Hilights that the Commission would have swiftly responded to the trending matter, but for the fact that the current boss of NITDA is about to become a minister, who may be detailed to the industry.

Accordingly, some members of ALTON who barred their minds with our correspondent said with the observed lack of remorse from NITDA on the regulatory matter so complained about, there are fears that the industry may be on fire if NITDA’s boss finally become the supervising ministry of the sector.