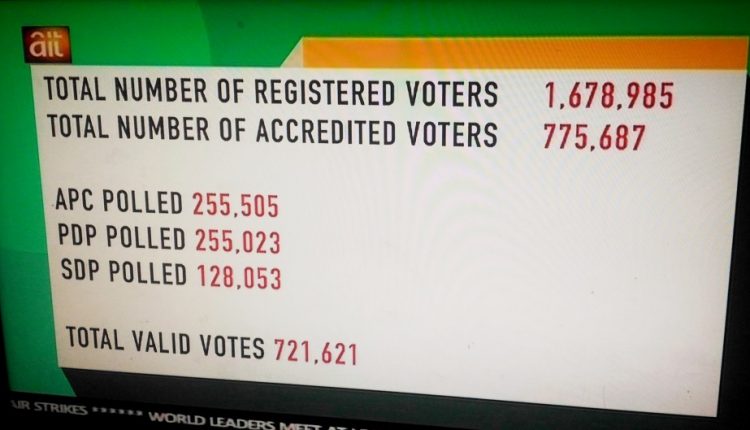 … As CUPP reacts, says INEC, APC reenacting 1983 electoral crisis ahead of 2019
The Secretariat of the Coalition of United Political Parties is worried that the Independent National Electoral Commission (INEC) and the Nigerian security forces have turned themselves into organs of the All Progressive Congress (APC). The same INEC that claimed to have cancelled results of some Polling Units due to disruption watched with collaborative silence as security forces comprising the Police, Civil Defence, Federal Road Safety Corps, National Drug Law Enforcement Agency, Nigeria Immigration Service, Nigeria Customs Service and the Nigerian Army comfortably turned themselves into joint militant wing of the vote-stealing APC.
For the very first time in Nigeria electoral history, accredited journalists and observers were manhandled, stopped from accessing voting areas. Security forces watched helplessly while APC thugs molested and intimidated voters, dispossessed them of their permanent voters card and abducted accredited agents of the opposition.
INEC has finally confirmed the speculation that it was indeed a conspirator in the denial of the mandate of Osun people freely given to Senator Ademola Adeleke. Nobody is in doubt anymore that the shenanigans of INEC during the collation and declaration of result was for a purpose. The deduction of votes from Senator Adeleke, the fictitious adding of votes for Alhaji Oyetola and suspicious declaration of an election adjudged by all INEC accredited observers as the freest and fairest in recent times as inconclusive due to disruptions is akin to INEC discrediting its own process just to please the APC.
The whole world has watched the show of shame in Osun, the whole world has seen Prof Mahmood Yakubu dance shamelessly naked in the market square for personal aggrandizement, all his pontification as a revolutionary and crusader of free and fair election have been washed down the drain. His character was tested, he failed woefully.
We had expected the INEC Chairman to rise above this madness, alas, he has only shown he is unashamedly one of them.
We hereby join the call by Patriotic Nigerians to demand the immediate resignation of Prof Mahmood Yakubu from office as the INEC Chairman while calling on all international agencies investing their money and other resources to see to a credible election to know that Prof. Mahmood is the singular greatest threat to credible elections in Nigeria. Any investments in INEC while he seats as Chairman is a waste and should be discontinued immediately till he leaves office.
We also remind our fellow countrymen that freedom cometh by struggle. Osun is the bridge of our tolerance to this quantum of brigandage by state institutions saddled with the responsibility to ensure credible elections.
Beyond this bridge, we shall not tolerate, accept or condone the acts of stealing of the mandate of the people. Osun is the last, it will not happen again.
Finally, we call on the good people of Osun to remain peaceful as their mandate will be restored by the judiciary.
INEC should cancel this sham, this charade, this contraption it conducted in Osun today if they ever want the Nigerian electorate to take them serious.
Nigerians now know what President Buhari is planning for the country and we shall be ready to resist his antidemocratic forces.We will resist any move to try this naked dance of shame against our people. Shameless desperate acts like this led to the Electoral crisis of 1983 which had dire consequences for our democracy then.
Nigerians now know that our opponents for the 2019 general elections include the Nigerian security forces and the INEC. We shall be ready to defend our nation’s values and credibility of the electoral process is key.
All Nigerians of goodwill are enjoined to raise their voices now and stop this impunity of a failed political party in power. The APC cannot truncate our democracy which they did not suffer for.

The police and army prevented PDP agents from watching the polling booths. APC thugs threatened and beat PDP voters. Journalists and election observers were prevented from monitoring and covering the process. Many of them were manhandled and beaten up. The APC openly bribed voters with 100,000 naira each. Is this an election? No sir!
The truth is there was no election in Osun today (September 27, 2018).
It was violence all through. It was daylight robbery and theft. It was a violation of the dignity, rights and sovereignty of the people of Osun state and Yorubaland.
As a people we have been down this road before in 1964,1983 and 1993 and there were serious and severe consequences. Those that have done this today have refused to learn from the lessons of history and I have little doubt that sooner or later there will once again be grave consequences and they will reap what they have sown.
This is no longer about PDP or APC but about the dignity and liberation of the Yoruba people. Those amongst us that have chosen to collaborate with the barbarians that seek to keep us in slavery and bondage will pay a heavy price.
We are not intimidated. They stole our votes, robbed us of our victory, raped our dignity, rubbished our self-respect and violated our rghts. Many of our people were insulted, intimidated, humiliated, beaten, wounded and maimed and our supporters were chased away from the polling booths by thugs and security agents.
They subjected us to all this but we remain confident and strong. Our heads have been bloodied but they are not bowed. There will be a day of reckoning for this great evil that has been visited upon our people and that day will soon come. Whatever they do or say we know that God is with us and He will never forsake us.
In the end justice shall be done and the victory shall be ours. Buhari, Tinubu, Oshiomole, Aregbesola and their APC are playing with fire and that fire will soon consume them.