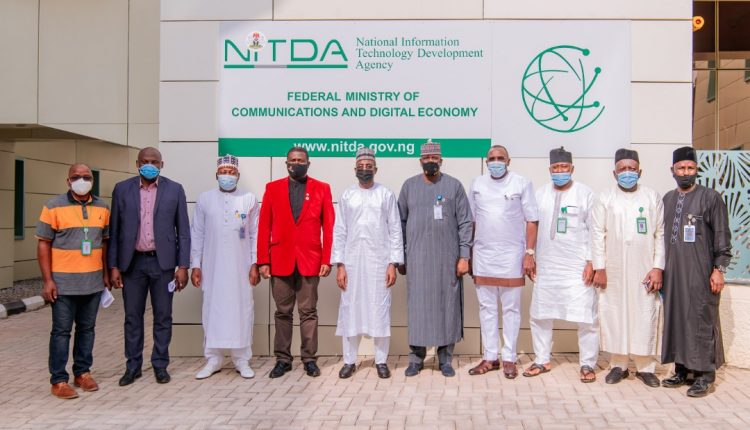 The Director General of NITDA, Kashifu InuwaAbdullahi, CCIE, has agreed to form a strategic alliance with the Nigerian Army Resource Centre on research and development solutions to tackle Nigeria’s security and allied challenges.

The agreement was reached during a courtesy visit by the Director General Nigerian Army Resource Centre; Major General Garba A. Wahab, at the Agency Corporate Headquarters, Abuja.

The General commended NITDA for assisting the Nigerian Army Resource Centre in providing ICT infrastructure and capacity building for the armed forces.

He recalled how NITDA made good her promise to intervene, two years ago, when he first paid a courtesy call on the Agency shortly after his appointment into office.

“ICT equipment given to the centre has been of great impact and many officers and staff of the centre have benefitted immensely from the trainings conducted using those facilities”, he affirmed.

He said the main current concern is how to provide research-based solutions to security problems, particularly those facing the Nigerian Army.

“This time around, we are here to say thank you to NITDA, and also to ask for more intervention and support in ICT infrastructure in order to cater for the large number of personnel that requires the knowledge and usage of ICT”, he remarked.

In his welcome address, Abdullahi thanked the management of the Army Resource Centre for the visit and the acknowledgement of NITDA’s modest contribution to the centre. He, however, called for a strategic partnership and collaboration between the Nigeria Army Resource Centre and NITDA for mutual benefit rather than mere support from NITDA.

He argued that most ICT innovations have its origin in the military as he strongly belief that the alliance between the two organizations will enhance the actualization of their mandates.

DG NITDA referred to the theory of the United States Air Force fighter pilot John Richard Boyd, who muted the OODA LOOP theory which states that you ‘Observe, Orient, Decide and Act’, as one of the theories used by the Agency to articulate the NITDA mandate.

The Chief Information Technology Officer of the country hopes for a situation where research from the resource centre and other research institutions in the country can be turned into physical beneficial products for national development.

He stated that NITDA focuses not only on research but also on development. R and D are intertwined in NITDA to enable the production and implementation of such research outcome.

“National security is a big challenge in the country today of which I believe the deployment of technology such as drones and robotics can address”, he submitted.

He agreed that both parties could work together since research is a major aspect of the military, noting that; “history shows that the Military and Information Technology have been strategic partners for a long time”.

The NITDA DG further said that the collaboration and sharing of theoretical aspects would foster the development of prototype that would help the Industry and the country at large.

He identifies that innovation cannot be done in Isolation, and that there is need to cross fertilize in the development of innovation.

Abdullahi suggested that crowd sourcing of intelligence could be employed to develop a solution to the current challenges, adding that NITDA start-ups can be challenged to come up with an innovation and the best ideas would be adopted.

He mentioned the recent commissioning of the National Centre Artificial Intelligence and Robotics where there is equipment that can design and print prototype of Drones, Robots and other things.

Abdullahi concluded that the relationship between the two organizations would foster a better Nigeria.

He added that there is a need to set up a committee to work on the modalities while still promising to support the Army Resource Centre with IT infrastructures, while looking at a win–win situation from the collaboration for both organizations and the country in general.

A committee comprising of two Directors from NITDA and two Brig. Generals from the Army Resource Center was commissioned and saddled with the assignment.