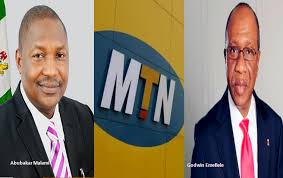 An Abuja Federal High Court, presided over by the Honourable Justice Aneke, Tuesday delivered ruling, rejecting the Notice of Preliminary Objection filed by the AGF in response to MTN’s lawsuit, thus, prompting the substantive case to be heard on June 26.
Recall that MTN had taken legal action after receiving a demand notice from the AGF alleging unpaid duties and taxes between 2007 and 2017. Their suit challenges the authority of the AGF to deal with issues around tax and custom duties. According to the law, oversight for this is the responsibility of the Federal Inland Revenue Service (FIRS) and Nigerian Customs Service (NCS).
The court heard arguments on the AGF’s preliminary objection on March 26, 2019. At the time, the AGF requested that MTN’s suit be dismissed because it was not filed within the appropriate timeframe, which the AGF asserted was within three months of receipt of the initial request for a self-assessment. Having considered the matter, the judge determined that MTN’s suit was not statute-barred, as the company was only required to file its case within 3 months of receipt of the actual demand notice, which it did.
Legal analysts say it is important to note that even if the court ultimately rules that the AGF is within its rights to assess taxes and duties, it does not imply that the assessment that has been made is legitimate.
However, MTN maintains that it is fully compliant with Nigerian tax laws. The company remains committed to meeting its fiscal responsibilities, and to contributing to the social and economic development of Nigeria.
Since incorporation in 2001, MTN has invested more than NGN2 trillion into the Nigerian economy and has paid more than NGN 1.7 trillion in taxes, levies and other regulatory fees.

Power, access to fund killed over 130 textile firms in Nigeria—CBN