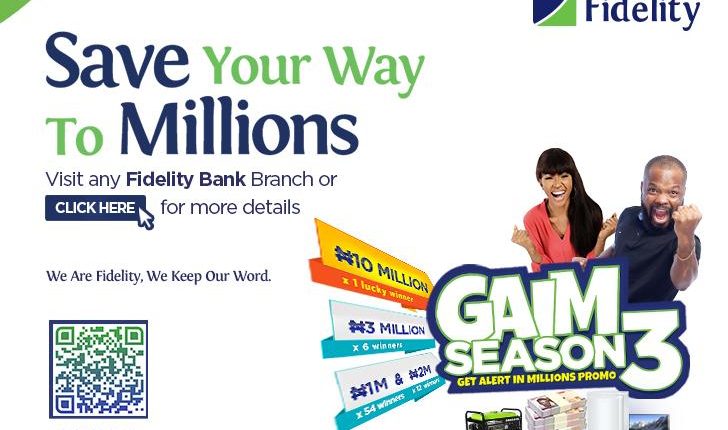 Since last year and still ongoing, the Fidelity Bank current promo tagged; Get Alert in Millions (GAIM), has continued to make many Nigerians millionaires.
Earlier this week Alhaji Oluwa Kareem Amodu, the Baale of Dankaka Community in Ajeromi Ifelodun Local Government Area of Lagos State, was among customers that got their prizes last Tuesday in Lagos at the ongoing Get Alert in Millions (GAIM) promo of Fidelity Bank Plc.
In his joy-laden explanation, the elated newest millionaire, said he opened the account, that won him the N1 million with just N1,000 and enjoined his subjects to emulate him.
In his remarks, the Managing Director of the bank, Mr. Nnamdi Okonkwo, represented by the Executive Director in charge of Products & Shared Services, Mrs. Chijioke Ugochukwu, said the bank started rewarding its customers through various promos 11 years ago, which has so far made significant impact on their lives.
According to her, the third promo draw conducted penultimate week produced 13 cash winners and 18 consolation prizes. Others who were around to receive their N2 million and N1 million cash prizes included Rahman Yusuf from Ilorin and Stephen Omomoyesan from Ibeju Lekki, while Chizoba Okonkwo and Uchenna Okafor went home with their consolation prizes of television and generating set respectively.
However, as part of side attractions at the event, Fidelity Bank showered the winner of its Jingles competition, Israel Samson, from Abuja, with N500,000 and a promise to put him in a recording studio to help promote his budding music career.
Business Hilights gathered that n the draw of the ongoing GAIM Season 3, 13 customers had emerged cash prize winners of N16 million, while 18 others got consolation prizes.

AELP Link to Boost Trading Between NGX, Other African Exchanges