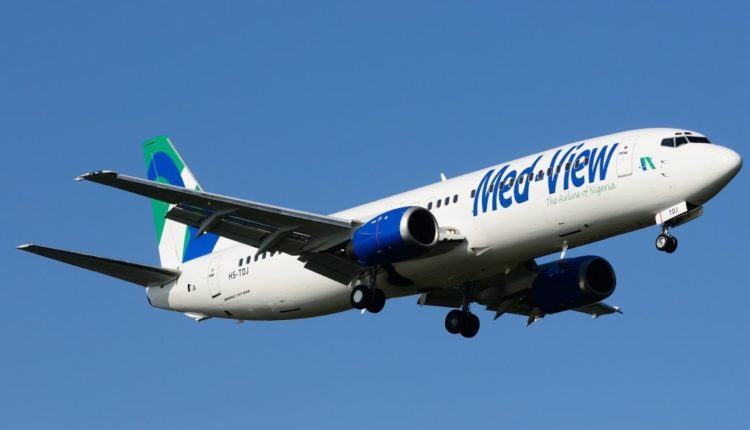 From several experiences, the end of life of some airlines in Nigeria starts with grounding of fleets till the last one standing and end of discussion.

Findings show that Med-View Airline, one of Nigeria’s struggling domestic carrier is at the verge of joining the rested majority as it was observed penultimate Monday that the airline’s only operating aircraft, B737-500, suddenly going out-of-service.

Whereas some workers of the troubled airline that hitherto boosted of several air planes are in panic mode not just due to the momentary out-of-service status of only flying air craft, but on account of unpaid salary that varies between three months and one year.

The fear is powered by the experience of November 2017 and June 2018, when the airline laid off a huge chunk of its workforce especially the outstation offices.

Now, Med-View apparently owes workers in different ranges beginning with crewmembers whose last payment was in March, while pilots are owed six months. Other categories of workers are owed for as much one year.

Though the management of the airline claims that the “downtime” was temporary, as the technical issues were due to be resolved for operations to resume shortly, industry pundits say the curtain for the airline is seriously warming up for closure unless there is a serious re-fleeting plan by either the core investors or new investors as soon as possible.

The airline pulled out of the London Gatwick and Dubai routes last year after a brief stint in the international market, citing harsh local operating environment, aircraft leasing programme that went awry and aggressive aero-politics.

Business Hilights recalls that Med-View remains the only local commercial operator on the Nigerian Stock Exchange (NSE). However, it has lately been in dire straits, posting at its last July annual general meeting a record after-tax loss of N10.33 billion, a 293 per cent drop from 2017 profit.

At its 2018 AGM, the management had pleaded with shareholders to bear with the zero dividends declared, as it assured that fortunes would soon improve when three aircraft on routine C-checks returned to operations.

Analysts say the only existing serviceable Boeing 737-500 servicing only Abuja route, cannot generate enough income to fix payment of salaries for the surviving workforce upon after series of retrenchment.

However, there seems to be a dim ray of hope considering the recent assurance of the CEO,  Mr Muneer Bankole, that the airline was restrategising its fleet operations to return to profitability, at least, on the local front.

According to him, “We have three classic aircraft that were all due for C-check at the same time. One is in Israel, another in Estonia and third was flying, but we got the money from the bank to put the second aircraft to use and so, it had been taken to Aero Maintenance base. I assure you that the third aircraft would soon be on the ground, because the domestic operation is our major market.

“Expect beautiful operations when the three aircraft get fully operational soon and each aircraft would be yielding about N376 million monthly. We also assure you that we will not lease aircraft, as we are working with a strategic partner in order to get a new aircraft into our fleet,” Bankole averred.