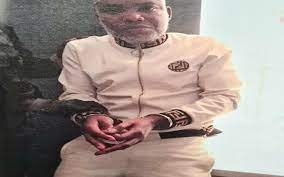 Barrister Aloy Ejimakor of Adulbert Legal Services, has sought clear explanations from the British Consular in Nigeria regarding the current problems faced by the leader of Indigenous People of Biafra (IPOB), Mazi Nnamdi Kanu.

The letter conveying the request read as follows;

“We are Solicitors to above-named British citizen, on whose behalf and Instruction we write this Letter to request an urgent Consular assistance to him.

Mr. Okwu-Kanu (aka Nnamdi Kanu) is the Leader of the Indigenous People of Biafra (IPOB) and Director of Radio Biafra, both of which are corporate citizens of the United Kingdom.

Mr. Kanu resides in the United Kingdom, from which soil he departed on an overseas travel on or about June 19, 2021 on a British Passport No: 556543086 (copy of biographic page attached herewith).

“We are reliably informed that while he was on said overseas travel, he was intercepted in Kenya by Nigeria’s foreign security agents and brought to Nigeria against his will on or about June 27, 2021 and ‘arraigned’ before the Federal High Court in Abuja without benefit of Counsel on June 29, 2031. Currently, he is being detained in the custody ofthe Directorate of State Security Services (DSS) in Abuja.

“Your Excellency, permit us to point to a few legal, political and diplomatic issues that have been implicated in this matter. They are:

Mr Kanu is a British citizen who was traveling on a valid British passport when he was seized in a third country and forcibly brought to Nigeria. Such act constitutes an unlawful rendition of a bonafide British citizen.

“He was not traveling on Nigerian passport or the passport of any other country, including that of Kenya.

“There is no extant Order of extradition by any British Court or any other foreign Court (including Kenya) and we are informed that there is no pending extradition proceedings standing against him in Britain or Kenya.

There is no deportation Order by any Kenyan Court or other authority that made him subject to deportation. But if there was, the country of his deportation should have been Britain on which passport he was travelling. Deporting him to Nigeria just because he was borne in Nigeria, but not traveling on her passport, is unlawful under international law.

The enterprise upon which Mr Kanu is engaged, which is: seeking the restoration of the defunct State of Biafra through a referendum is a protected political opinion (i.e. self-determination) under British and Nigerian Laws, where it is enacted at CAP A9, Article 20, Laws of the Federation of Nigeria, 2004.

In our view, the manner of his interception and forcible deportation to Nigeria is extra-legal and does not comport with the pertinent international laws and treaties to which Nigeria is subject.

On the basis of the foregoing, we hereby make the following Prayers:

That Mr Kanu be granted every possible Consular assistance to which he is entitled as a British citizen.

That Mr Kanu be categorized as a high-profile political prisoner or a prisoner of conscience andbe thus rendered the highest diplomatic protection under municipal and international laws.

That the Nigerian authorities be prevailed upon to immediately allow access to Mr Kanu by his Lawyers, Doctors and Family members.

That the British authorities file a Diplomatic Note or other legal process withNigeria’s Federal High Court and the Office of the Attorney General of Nigeria indicating her sovereign interest in Mr Kanu’s matter.

That the British authorities declare that Mr Kanu is not a criminal but a person who possesses a political opinion the Nigerian authorities are seeking to suppress by means of punishment of some sort.

That the British authorities urgently demand the unconditional release of Mr Kanu from detention.

Barrister Aloy Ejimakor of Adulbert Legal Services, concluded his letter by averring that, “While we await your urgent and most favourable considerations of our Prayers, please be assured of our highest esteem for Your Excellency, the High Commission and the British Government.”

Uzodimma thanks Zinox boss, other Imo people for return of peace to state

MY PERSECUTION BY BUHARI REGIME: SETTING THE RECORDS STRAIGHT