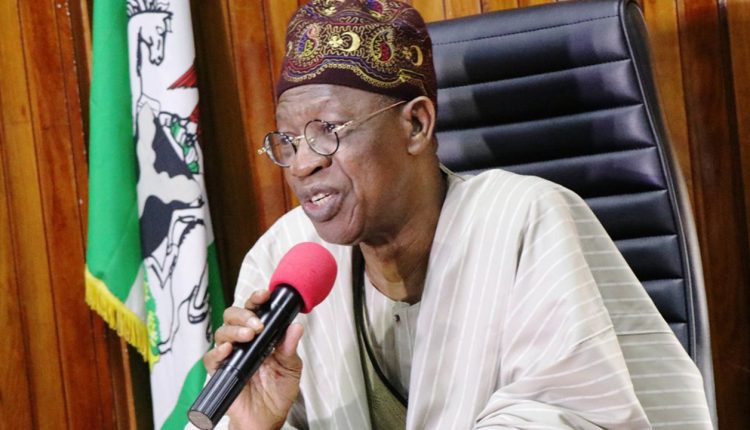 The Minister of Information and Culture Alhaji Lai Mohammed has disclosed that the Digital Switch Over (DSO) roll out across the country will hit Lagos on April 29.

The Minister who disclosed this during the Ministerial Taskforce’s engagement with stakeholders in Lagos said the Federal Government constituted the 14-memberTask Force being chaired by him to quicken the pace of the DSO rollout across the country.

He said, “The Federal Ministry of Information and Culture considers the DSO as one of its priority projects, because of its potential to create jobs, bring governance closer to the people through better access to information, thus deepening democracy, bring internet to millions of homes and also provide quality programming, especially those produced locally, to Nigeria’s estimated 24 million television households, with high fidelity pictures and sound.”

The minister said they have rolled out the DSO in five states and Abuja, saying the programme was launched in Jos, Plateau State and went live in the Federal Capital Territory, Kwara, Kaduna , Enugu and Osun States.

According to him , ‘’With the recent approval by the Federal Executive Council of outstanding payments to key stakeholders in the DSO Project, we are moving rapidly to cover the remaining 31 states. We are kick-starting the new rollout here in Lagos State on April 29th 2021, Kano State on June 3rd 2021 and Rivers State on July 8th 2021. We will then follow up with Yobe state on July 15th 2021 and Gombe State on August 12th 2021.”

Mohammed explained that the DSO is about stimulating local content and empowering platform owners, adding that it is also about creating jobs for the teeming population, especially the very creative youth population.

“Distribution, which entails supplying the market with Set Top Boxes, TVs and Dongles for the internet, will require at least 100,000 wholesalers, retailers, electricians, installers, marketers and payment solution providers in order to cover the entire country, while TV and Online Advertising can create a further 50,000 jobs: These are just some of the job opportunities from a successful DSO Project.”

In his address, the Acting Director-General National Broadcasting Commission (NBC), Prof. Aduku Armstrong Idachaba said the conference will set the framework for the implementation of the process in Lagos.

He added that, ‘’We have therefore brought to you today, the Ministerial task force on the DSO chaired by the Honourable Minister himself, Digiteam is also here, the Free TV platform, the coalition of critical operators in the process are also here to offer detailed explanations of the process’.’

Idachaba pointed out that the Directorate of Broadcast Research and planning has undertaken a study of the next phase of the roll out.