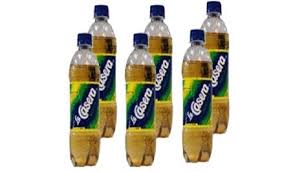 The Managing Director of The Lacasera Company Plc, Roland Ebelt has given an assessment of the performance of its company, saying “Lacasera is between two big players in the market, Coca Cola and Pepsi”.

According to him, “They have by far the biggest market share, at number one and number two. Coca Cola has 50 per cent, Pepsi has 40 and then you have some smaller players. We are number three but we are a small player. We have about four per cent of the market, same as Big Cola”.

“Between the four of us, we have 98 per cent of the market and the small regional and local players have the two per cent.

On plans to boost market share this year, Ebelt averred that “We want to reach 10 per cent of the market. Right now we are four and that is a big burden. We need a 150 per cent improvement. We are not going to get there in one year because this is a journey that we are embarking on over the next two to three years”.

Giving further insights on in roads to the international market share, he noted that “The product Lacasera is present all across the West Coast of Africa. People are taking products from Nigeria to Ghana, Benin Republic, Togo, Senegal and other places.

“We don’t have an organisation on ground in those markets but we know that the product is present there.

“Apple as a drink is liked by all, not only in Nigeria but across the West Coast. But our major strategy is Nigeria because in all of West Africa, two thirds of the people live here.

Ebelt took time to look at the typical challenges that face your industry and explained that “There are so many of them. Whenever you go to the meeting of the Manufacturers Association of Nigeria, you hear the same gospel: we need better roads, we need a more stable power supply and I think those are really the two main aspects. Because our products are distributed all across Nigeria, the roads and electricity are the major needs of the sector”.

Continuing, he added that “Security has been partly addressed so that is no longer a big issue. Yes, we hear violent outburst from time to time but generally, it is much safer now and with this safety, we are making good progress”.

NPA sympathises with TCIP over inferno, restates to safety standards