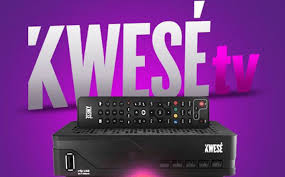 Barely less than one year of service delivery, subscribers to Kwese TV in Nigeria have faced what majority of them described as abrupt shutdown of over 41 channels out of the 65 officially coming with the Pay TV bouquets they paid for in November.
Besides, most angered are new subscribers, who just purchased the TV decoders in the last one month with the aim of enjoying their money only to observe that it was a waste of resources after all.
Many of the victims who made their complaints while explaining their ordeals at Business Hilights Lagos Office, expressed strong regret at the decision they made to go for the brand, vowing to forward a petition to the National Broadcasting Commission (NBC) and Minister of Information for immediate redress.
It was discovered that Kwese TV ended the subscription to its satellite TV on November 1, 2018, leaving a collection of Free-to-Air channels, Kwese Sports and religious channels at an annual rate that has not been fixed.
It would be recalled that Econet Media, marketers and owner of the brand of Pay TV, had promised to refund customers who had subscribed to its various bouquets in November, but many of the protesting subscribers denied any form of refund or compensation as at Wednesday, saying their next move will be to approach NBC who gave Kwese TV the operating license.
However, the group, through its customer care handles, had asked customers to get its new box called Kwese Play, to access its digital streaming services, claiming it had repositioned its business to focus on mobile entertainment business namely Kwese Free Sports, Kwese iflix and Kwese Play that would be delivered via broadband infrastructure.
The protesting Kwese TV subscribers say all efforts to reach the company via their customer care lines kept failing, an indication, they said suggests an orchestrated embarrassment to the Nigerian customers.
Efforts to get the position of the NBC on how the agency usually handles such matters failed as at press time on Wednesday.
However, industry analysts say Kwese TV’s sudden shutdown was destined to happen as its on-demand and pay-as-you-go model pitted it against competitors who are working with deep pockets and industry years of experience.
Observers are of the view that Kwese TV jumped into Pay TV without due diligence and fake believe that it will be so easy to outsmart existing players easily, but it is currently backfiring.
One of the pundits was quick to observe that “The pattern is the same every time. They arrive, they promise a lot of things, they deliver for a couple of months, struggle for even more months and eventually shut down”.
Some subscribers are of the view that recent eventual freeze of new Pay TV entrants due to stiff competition and inability to carry strategic signals largely wanted by many like DStv and its lower basket, the GOtv, may suggest after all that MultiChoice will continue to remain unbeaten in the market segment for years to come unless the ongoing Digital Switch over (DSO) is finally successfully nationwide.
Earlier few years ago, when HItv came in, it crashed. Last year, a new cable television firm, Telcomm Satellite TV, that started operations in October 2017, decried hostile competition from peers and just recently, TStv, which had earlier offered 200 channels on its decoder last year, said it would only be able to offer 45 channels.
Currently, subscribers of other Pay TV service providers other than DStv and GOtv are still having one form of complaints or the other in terms of quality of service and offerings.

FG ambushes Dangote refinery, shifts revival of all 4 refineries to 2020