The outgoing Chief Executive Officer of Tony Elumelu Foundation (TEF), Ms Parminder Vir (OBE), today was officially given a Nigerian name of Igbo background, ‘Amaka’ (which means ‘is good’) shortly after her opening goodwill message at the occasion of the foundation’s 2019 entrepreneurs Programme at the Transcorp Hilton, Abuja. The naming ceremony was witnessed by everybody in the house including Mrs. Aisha Buhari, wife of  the President, founder of the Foundation, Mr. Tony Elumelu and other dignitaries.
The master of Ceremony who made the cheerful but brief naming ceremony said the gesture was in recognition of Vir’s uncommon support to the spirit of the TEF in her five years stay in Nigeria as CEO of the Foundation.
Business Hilights gathered that Vir remains the first Asian woman to attend Dartfrod College of Physical Education, founded by Madame Martina Bergman Osterberg in 1885. It was the first training college in England for women wishing to teach physical education.
In1976, Dartford College was amalgamated with Thames Polytechnic and eventually incorporated into the University of Greenwich. The university maintains The Bergman Österberg Archive, a collection of material regarding her physical education college in Dartford. The Dartford College site is now operated by North West Kent College.

Besides, Parminder Amaka Vir has achieved widespread recognition in the UK and across Africa and India for her achievements in the fields of film, television, and the arts; investment funding and entrepreneurship. As executive producer, non-executive director, and CEO she has the kind of energy and vision that inspires others; and a track record of creating opportunities and adding value through sound strategic planning. Parminder has devoted her working life to a passionate pursuit of untapped potential – both in terms of business development to reach their markets and as a teller of untold stories from those most often without the resources to reach their deserved audience.
Currently, as CEO at the Tony Elumelu Foundation, Africa’s leading philanthropic organisation based in Lagos, Nigeria, she oversees the strategic development and implementation of its key programmes and activities. Inspired by the Founder, Tony Elumelu’s vision to institutionalise luck and democratise opportunity to create a generation of African entrepreneurs, she joined the Foundation in April 2014 to help operationalise this vision.
She designed, developed, and has implemented one of the most ambitious entrepreneurship programmes on the continent – the TEF Entrepreneurship Programme, a 10-year, $100 million commitment to identify, train, mentor, and fund 10,000 entrepreneurs from across the continent.
Prior to joining the Foundation, Parminder has enjoyed a distinguished career as an awarding winning film and television producer; private equity investor in film and media, and founder of three successful media and consultancy companies. She has served as a Board Director on UK India Business Council, Department for Culture Media and Sports, the UK Film Council, and The Indus Entrepreneurs UK.
Parminder has received numerous industry awards including the Order of the British Empire (OBE) by Queen Elizabeth II for her services to the Broadcasting and Film industry in 2002.

High point of the occasion was the announcement of 2,050 African entrepreneurs, drawn from all 54 African countries, selected to join the 5th cycle of its $100million TEF Entrepreneurship Programme after the presentation of the selection process document by Accenture Development Partners.

Business Hilights gathered that this year, over 216,000 applications were received, an increase from last year’s 151,000. Nearly 90,000 were submitted by female entrepreneurs, an increase of 45%, illustrating the Foundation’s strategy to achieve greater gender balance.

The selected Entrepreneurs will each receive non- refundable $5,000 of seed capital, access to mentors, and a 12-week business training programme, directly focused on the needs of African entrepreneurs.

TEF Founder, Tony O. Elumelu, CON, who celebrated his birthday same day, said, “Every year, we face an almost impossible task to select 1,000 entrepreneurs, from the hundreds of thousands that apply. Our entrepreneurs are hungry to effect change. We know we are only scratching the surface, we see the depth of entrepreneurial talent, that all of us; government, business and indeed African society must harness to transform our economies and livelihoods. We must rally together to empower them and accelerate the change we want on the continent”.

In her goodwill message, Mrs. Aisha Buhari, the wife of the President, Federal Republic of Nigeria, commended the Programme’s impact on the continent, charging the selected entrepreneurs to contribute to the advancement of the African continent.

She said “Indeed, I am confident that these Tony Elumelu entrepreneurs will inspire deep confidence and be of immense value not just to Nigeria but to the entire continent,” she said. 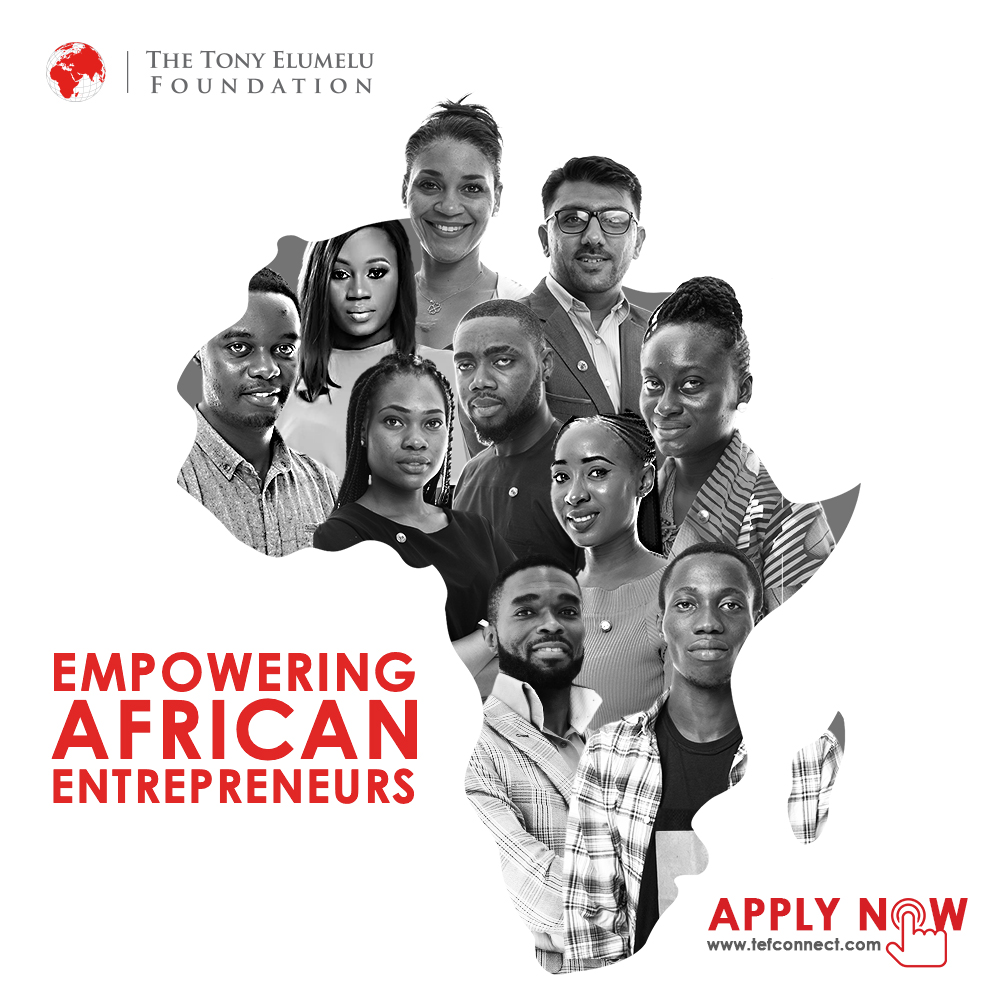