Just in: Surprise as PDP, APC supporters rejoice together on Zamfara S’Court ruling 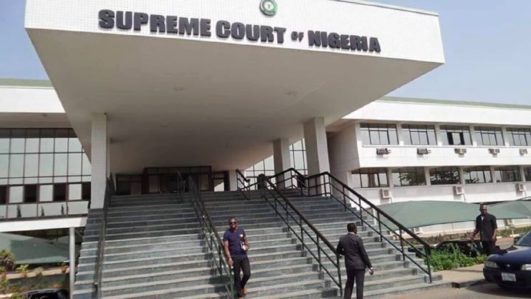 A rare occurrence; joint celebration of Supreme Court judgment is happening now across Zamfara State following Friday’s ruling upholding the ruling of an appellate court which had earlier declared that there were no valid primary elections by All Progressive Congress (APC) in the state ahead the 2019 general elections. With the judgement, all APC candidates who won elections should forfeit their wins to the Peoples Democratic Party candidates.
Otherwise, the ruling effectively ended the hopes of Nigeria’s ruling All Progressives Congress (APC) of leading the north-western state for the next four years as PDP now takes over from the State House of Assembly to National Assembly and governorship.
Business Hilights recalls that Court of Appeal, Sokoto Division had ruled in March that no valid primaries were conducted by the APC in the state considered as an APC stronghold hence all winners under APC remain null and avoid to the advantage of second runner up party candidates which were all PDP.
Our correspondent in Gusau reports that supporters of both parties were seen celebrating together. On why APC supporters were rejoicing with the PDP, one of the top APC member who pleaded anonymity said “We are joining PDP members in celebrating the Supreme Court ruling because those that thought that they are owners of APC in Zamfara have seen that no matter how you suppress the wishes of the people, you will always lose at last. It has happened as you can see it clearly today.
“If they can learn, they should come back to us again for us to start rebuilding the party from the scratch. But if they cannot, APC will continue to lose. Am not among those blaming Senator Marafa for initiating the court action. He did what he should do as a dedicated leader even though APC is the final loser. For your information, expect massive exodus from APC to PDP in the state going forward.
On why the PDP members were celebrating, many of the party faithful said their joy know no bound because as it stands now, as little as we spent in the election, we are all winners today.
They agreed that APC members supporting them are those that stand by integrity and rule of law and that is why we allowed them to join us in celebrating the judiciary for saving Zamfara today.
One of the high point of the Supreme Court judgement is the ordering of APC to pay a N10 million fine.
Otherwise, “Candidate other than the first appellant with the highest vote stand elected. A cost of N10 million is awarded against the appellant,” the court ruled.
The Supreme Court made it clear that it was proved beyond all reasonable doubt that the electoral body, Independent National Electoral Commission (INEC), did not supervise any primary conducted by the party as mandated by law hence all what APC did in the name of primaries are of no effect and nullity.
By this ruling, analysts say, INEC now has a duty to first recall all given certificate of return to all APC candidates and immediatly recognise all PDP or any other party candidate that came second in all the elections purported to have been won by the APC.
With the ruling, PDP can be said to have added Zamfara as one of its states in the North West. Already, the PDP Governor-elect, Bello Matawalle, today called an emergency party caucus meeting  with planning for inauguration ahead of May 29 being the major agenda in line with ruling.
Already, the INEC Friday held an emergency meeting which analysts say will end up in recalling all certificate of returns from the APC candidates and handing same to the PDP as soon as possible.

(Opinion): Our Democracy and Insecurity by Muhammad Yakubu