Barely 24 hours the Nigeria Customs Service (NCS), Zone A, announced seizure of about 147 sacks of pangolin scales weighing 9,504.1kg worth N10.26 billion, the AFP today, Friday, February 7, 2020 Chinese scientists came up with facts suggesting that the endangered species may be the link that facilitated the spread of the novel coronavirus across China.

The Pangolins or scaly anteaters are mammals of the order Pholidota, with the demand for pangolin scales and meat driving pangolins toward extinction.

Pangolin scales, like rhino horn, have no proven medicinal value, yet they are used in traditional Chinese medicine to help with ailments ranging from lactation difficulties to arthritis.

The Comptroller-General of Customs (CGC), Hameed Ali, who disclosed this in Lagos, said Nigeria, as a signatory to CITES (Convention on International Trade of Endangered Species), categorises this specie under absolute prohibition; therefore, its importation or trade is illegal globally.

According to him, the scales are typically dried and ground into powder, which may be turned into a pill. He said: “On January 19, the roving team of the NCS, Federal Operations Unit, while on credible intelligence, uncovered an abandoned warehouse at Isheri Estate, Lagos, where 2x20ft containers were stacked. 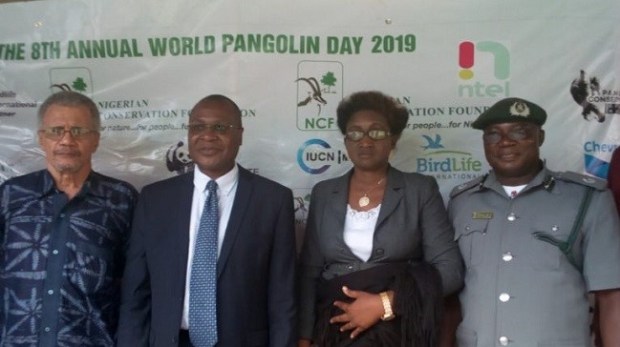 It was not yet clear if the scales were sourced from Nigeria or Lagos is serving a transit route for the illicit trade.

On the Coronavirus scourge, at least 31,000 people have been infected and 630 killed by the virus, which has spread to two dozen countries.

Researchers at the South China Agricultural University have identified the scaly mammal as a “potential intermediate host,” the university said in a statement, without providing further details.

The new virus, which emerged at a live animal market in central China’s Wuhan city late last year, is believed to have originated in bats, but researchers have suggested there could have been an “intermediate host” in the transmission to humans.

After testing more than 1,000 samples from wild animals, scientists from the university found the genome sequences of viruses found on pangolins to be 99 percent identical to those on coronavirus patients, the official Xinhua news agency reported Friday.

The pangolin is considered the most trafficked animal on the planet and over one million have been snatched from Asian and African forests in the past decade, according to the International Union for Conservation of Nature (IUCN).

They are destined for markets in China and Vietnam, where their scales are used in traditional medicine — despite having no medical benefits — and their meat is bought on the black market.

China in January ordered a temporary ban on the trade-in wild animals until the epidemic is under control.

The country has long been accused by conservationists of tolerating a shadowy trade in endangered animals for food or as ingredients in traditional medicines.

The SARS (Severe Acute Respiratory Syndrome) virus that killed hundreds of people in China and Hong Kong in 2002-03 also has been traced to wild animals, with scientists saying it likely originated in bats, later reaching humans via civets.

Concession Onitsha Port to be operational, moving cargoes is nothing—Stakeholders