Just in: ‘Fear Not,’ who disarmed solider on Gov Umehi’s convoy arrested

Gradual peace has begun to return to Ebonyi State, barely four days after a deadly criminal named Chibuike, popularly called ‘Fear Not’ was caught by massive manhunt staged day and night by community youths and the Army.

He was Thursday morning brought to Abakaliki Government House before being whisked away by security agencies for further investigation and prosecution. 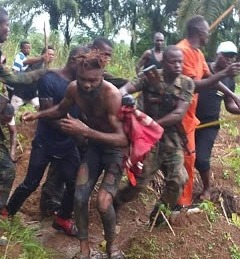 Recall that trouble started midnight weekend when the Ebonyi State Governor, Chief Dave Umehi was returning from home town after a function at midnight when youths blocked the highway on grounds of vigil for the death.

In a fracas that ensued, though the governor’s convoy escaped unhurt, one of the soldiers in his security details was disarmed by ‘Fear Not’ and escaped with the rifle.

Business Hilights South East Bureau chief reports that since the incident occurred, the community has not known peace as innocent citizens were arrested and harassed by soldiers. The soldiers threatened to continue the arrest until he is arrested and the rifle is recovered.

However, it was clear if the rifle was recovered during his arrest on Wednesday evening inside a thick forest in the state even as the State Governor had ordered that henceforth, all kinds of wake keep shall not exceed 10pm unless an express written permission is secured from the chairman of the particular local government area in the state.

S’West, entire North favoured in 2020 budget on no new projects—Findings

Just in: Daily Graphic update on COVID-19 in Nigeria