Just in: Atiku, Ezekwesili sign National Peace Accord for 2019 Elections 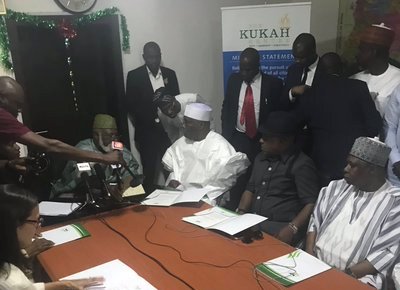 Barely 24 hours after President Muhammadu Buhari and other presidential candidates for the 2019 elections signed the National Peace Accord Agreement for the 2019 Elections, candidate of the Peoples Democratic Party (PDP) and former Vice President, Alhaji Atiku Abubakar, who had earlier expressed his readiness to sign but blamed poor communication for missing yesterday, was at Bishop Kukah Centre and signed the document after going through.

He was at the Centre with party chieftains including national chairman, Prince Uche Secondus and key figures in his campaign organization.

Addressing the media shortly after, elated Atiku called for restructuring of the National Peace Committee (NPC), lead by former military Head of State, Gen Abdulsalaam Abubakar so that some of the observed lapses could be avoided going forward.

In a tweet by Prince Secondus, @Uchesecondus, he said “Today, I led our party’s Presidential Candidate @atiku Abubakar to sign the National Peace Accord Agreement for the 2019 Elections at the Bishop Kukah Centre”.

Ahead 2019, Dogara gives tips on how to tame vote buying at elections