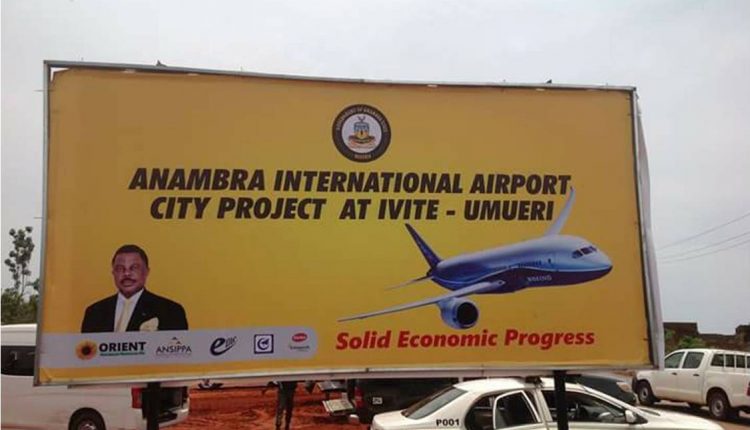 More than two years after the incumbent Governor of Anambra State, Chief Willie Obiano, sealed a $2bn Memorandum of Understanding (MoU) with Chinese investors to signal the effective takeoff of construction activities at site of Umuleri International Cargo Airport (UICA), observable facts show a picture of abandoned project.
Recall that on Tuesday April 11, 2017, Governor Obiano inked a $2bn MoU between the Government of Anambra State, China Aviation, Orient Petroleum Resources Limited and Elite International Investment Holdings Limited.
Whereas Chief Obiano, currently on his second term of office, has revealed that “With the speed of works at the Umuleri International Cargo Airport (UICA), and the combined commitment of my government and core investors, the project will be ready in 2019,” there seems to be nothing on ground to support the claims he made in Abuja shortly after submitting his nomination form to run for second term in office in 2017.
Having won the election and been in office in the last nearly three year, latest checks by Business Hilights South East Bureau chief showed shadows of abandoned project as community leaders who spoke with our reporters, decried what they described as total neglect.
The community leaders further decried government’s abandonment of his assurance that community roads leading to the airport will be delivered less than six months after being re-elected in 2017.

Additional findings revealed that the entire 1,500 hectares of land hurriedly cleared at the approach of 2017 election that returned Obiano have remained overgrown by bushes, just as herdsmen also found the massive land a fertile place for their herds to graze.
Besides, erosion has stepped in chopping off a sizeable portion of the land and further placing a serious question mark on if the project can actually go on in future.
The fresh gully erosion has already started eating deep into the access road into the project site from Nteje – Umueri road.
From the other flank, coming into the proposed airport via Nsugbe axis where the celebrated Orient Refinery would come up is another failed project of road construction as the contract awarded since 2015 has left the radar also.
During the recent Business Hilights Bureau Chief visit, the lead partner-contractor was not on site nor is any of its machinery. Everywhere played host to emerged ghost grassland impending rainforest by 2020 when the facility is billed to be delivered. This assertion became valid based on the fact that no machinery was on site and the state government is not ready to give any explanation.
Currently, local farmers and herders are driving their businesses with the aim of leaving as soon as the Obiano administration is ready. This was the consensus submission of herders and farmers seen on the massive land.
Some of the community members who pleaded anonymity confided in Business Hilights that they are suspecting a lingering legal or understanding issue between the government and another group, whose promoter lives in Benin City but with some links with an European concern bordering on the terms of the project delivery even before the signing of the $2bn Chinese deal.

Though contacted government officials were economical with words on why the speed of work is not sacrosanct with the governor’s assurance, they denied ever having anything to do with any Benin City resident Airport development agent.
Business Hilights recalls that in 2016, Governor Obiano had given an insight on how the project will be funded, delivered and managed.
The Governor had explained during the signing ceremony of the MoU in Awka, the State capital, that “Against all expectations and at a time of great economic recession, we have established our beloved state as a compelling investment destination and attracted investments valued at over 5 billion US Dollars”.
“And with this airport city project, the figure now stands at 7.2 billion US Dollars. We have also successfully placed Anambra on the agricultural map and blazed a trail with the exportation of our farm produce to the UK. In addition, we have positioned Anambra as the safest state in Nigeria and completely re-engineered the social architecture of our beloved state. Finally, we have re-awakened self-belief among our people and provoked their can-do spirit. Ladies and gentlemen, Anambra is finally on the RISE!
Obiano recalled that “what we have come to flag off in Umeri today is not your usual airport project. Mbanu! Nke anyi di iche! What we are flagging off today is an Airport City Project with a model that will accommodate an airport with two runways, an aviation fuel dump, an airport hotel, an industrial business park, an international convention centre as well as a facility for aircraft maintenance”.
He explained further in 2016 that “The Umueri airport city project is conceived to join some of the most advanced airports in the world with a capacity to land any of the most sophisticated vessels known to man today. It sits on 1500 hectares of land with enough elbowroom for expansion from Ivite Umueri to neighbouring communities such as Nando, Umunya, Otuocha, Aguleri, Nteje, Nsugbe and beyond.
“The project is estimated to cost over 2 billion US Dollars. It is a partnership between the Government of Anambra State, Orient Petroleum Resources Limited and Elite International Investments Limited (Sinoking Enterprises Limited).
“Under the contractual agreement, Elite International Investments Limited will provide all the funds needed for the project under the Build-Operate-Manage-and-Transfer arrangement. However under the same SPV arrangement, the Anambra Airport City Infrastructure Limited has allocated 75% equity stake to Elite International Investments Limited, 20% to Orient Petroleum Resources Limited and 5% to the Government of Anambra State. The host communities are entitled to 3% of the profit from this project in perpetuity as a part of the standard corporate social responsibility”.

On other economic benefits of the Umueri Airport City Project, the Governor noted that “It is expected to generate 1,200 direct and 3600 indirect jobs. We expect that Ndi Anambra will grab 70% of these jobs in continuation of our efforts to create wealth and prosperity for our people”.
“It will also provide an opportunity for training and skills transfer to our people. I have no doubts whatsoever that this project will have a tremendous impact on the ease of doing business in Anambra State as it opens a direct access by air to our vast markets. In particular, I hope that on completion, the Umueri Airport City Project will wipe out the difficulties our businessmen and women often encounter in exporting and importing goods and services and help in improving the entire supply chain.
Though in his 2016 comments being reviewed, the Governor said “with this project and our subsequent plan for a light rail project, Anambra State will eventually assume its rightful place as a major commercial and industrial hub in the West African sub-region,” three years later, there is nothing in the state to show signs of rail project.

Just in: Why NBC shut down AIT TV, Raypower Radio

NPA reacts to report on lopsided appointments of General Managers