Like it was said, for National Interest, industry stakeholders, lead by the Nigerian Press Organisation (NPO), a consortium of media interests in Nigeria have resolved the recent differences between the National Broadcasting Commission (NBC) and Daar Communications Group, operators of AIT and Raypower Radio.
However, the truce did not come without casualties even as both parties have agreed to settle out of court on the suit filed by Daar Communications.
The key victim, considering its disappearance since the peace deal on AIT Kakaki, is the ‘Kakaki Social’ segment, anchored by Mr Ohimai Amaize usually aired between 8.00Am to 8:20AM weekdays.
Kakaki Social was an innovative analysis driven by comical and to some extent, deep piercing thoughts of trending socio-political and rarely economic happenstances by people on different social media platforms. Recall that the NBC had in its earlier warning letter to AIT, made a specific objection to the contents as they relate to breaches to the prevailing National broadcasting Code.
Though the stoppage of the segment was not clearly contained as one of the conditions for the truce, Public Affairs analysts, who spoke to our correspondents, said the segment may have served as the major sacrifice for the truce to stand after all.
Recall that NBC had earlier last week, suspended the Broadcast License of Daar Communications Plc., over repeated breaches of broadcasting codes and inability to pay licence renewal fees.
However, Daar Comms secured an exparte order restraining the shutdown of operations which made the stations to go live since weekend.
Following the reopening of broadcast operations by AIT and Raypower, NBC Saturday, issued a statement informing Nigerians that whereas it takes note of the court order, it still sees the reopening of broadcast as continued breach.
However, the intervention of industry stakeholders led by the President of the Nigerian Press Organisation (NPO) and publisher of ThisDay Newspaper, Mr Nduka Obiagbena, truce was reached with acceptable terms and conditions. 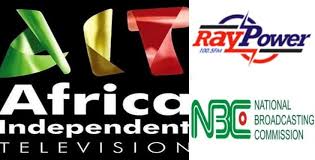 NPO comprises of the Newspapers Proprietors Association of Nigeria (NPAN), Broadcasting Organisations of Nigeria (BON), The Nigerian Guild of Editors (NGE) and The Nigerian Union of Journalists (NUJ).
At the meeting of all parties, the NBC DG, Mr Is’haq Modibbo Kawu, restated the agency’s commitments to freedom of expression and the constitutionally guaranteed role of the media under sections 22 and 39 to hold governments accountable, which states amongst others that the press, radio, television and other agencies of mass media are to uphold the fundamental objectives contained in the 1999 constitution and ensure the responsibility and accountability of the Government to the people.
The NBC also raised concerns about the non-adherence of the DAAR Communications group (AIT/Ray Power) to the Nigeria Broadcasting Code, despite repeated interactions on same; the NBC then cited lack of editorial balance by DAAR Communications as well as the lingering issue of non-payment of national network license fees by DAAR Communications.
However, in his response, DAAR Communications Plc. defended its position saying it gives its team freedom to make editorial commentary on issues of the day relying on Section 39 of the Nigerian Constitution guaranteeing freedom of Expression, freedom to hold opinions and to receive and impart ideas without interference.
DAAR stated it had made some payments on account to the NBC but acknowledged that there were some defaults in the payment plan they submitted to the NBC, and explained that the defaults were due to decisions jointly reached at BON meetings by all broadcasters to engage and renegotiate the cost of license fees with NBC, in view of the current difficult economic realities affecting the industry. But the NBC insists that license fees are statutory and thus non-negotiable.

TD wins Philips Partner of the Year Award in Mauritius

31 global facts on 5G everybody must know