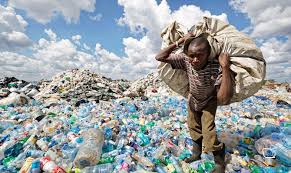 The United Nations Environment Programme (UNEP) launched a scathing report about plastic and environmental inequality, which shows how countries within the Global South are being force-fed plastic pollution by wealthy countries.
The report, titled Neglected: Environmental Justice Impacts of Plastic Pollution (https://bit.ly/3fuZ3hp), exposes the truth about how the plastic industry is capitalising on “false solutions” such as recycling when, in fact, single-use plastic waste is more likely being shipped off to developing countries than being recycled. It also demonstrates the impact of plastic, at every stage of its production, on underprivileged communities – from the oil extraction to its disposal in the environment, to its incineration, should it even reach this point.
Responding to the report’s findings, Greenpeace Africa Pan-African Plastic Lead, Angelo Louw noted that “This report is a big wakeup call as far as the extent to which the plastic industry is willing to go make a quick buck, at the expense of everyone else – especially people of colour, who are the majority in these types of communities and countries. They have no consideration for the disadvantaged communities that they are driven even further into disarray.
“The plastic industry even bullies our governments, who are trying their best to manage the plastic pollution crisis, into bending their laws so that they can continue with their profit making agenda. Last year, we exposed an example of corporate attempts to destabilise Africa’s plastic-free ambitions, where the American Chemistry Council lobbied to include clauses in on-going Kenya-US free trade agreement negotiations which undermine their single-use plastic bans.
“In countries like the DRC, corporations are ignoring anti-plastic legislation and this is forcing governments to make large investments into the enforcement of these laws. Why should our countries be burdened with the additional cost? Why can’t corporations respect our laws? Why can they respect our decision to achieve a healthy life?”