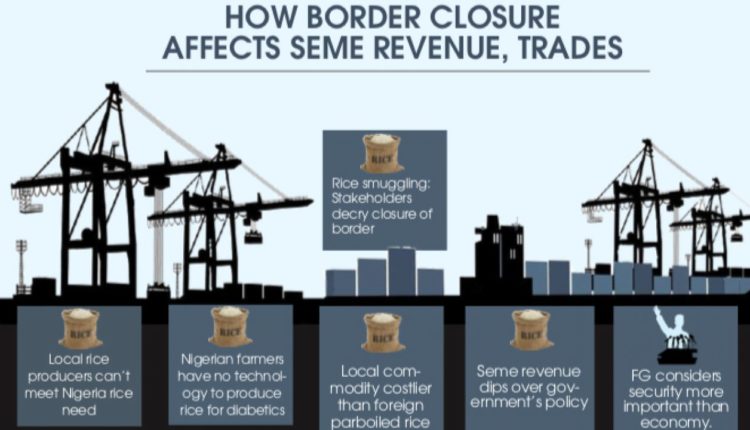 Barely three days after the Director General of Lagos Chamber of Commerce and Industry (LCCI), Mr Muda Yusuf argued that it amounts to questionable policy for a government to unilaterally shutdown land borders simply because of the failure of security agencies to stop rice smuggling, number of stranded loaded trucks are surging.

Otherwise, scores of trucks conveying made-in-Nigeria goods, including popular brands like Dangote, Unilever, Cadbury, among others have been trapped at various border-posts, especially on popular Seme and Idiroko border posts.

Whereas experts say hundreds of millions of naira wasting away at a time the Manufacturers Association of Nigeria (MAN) are groaning in anguish caused by harsh production environment, LCCI boss decried the dangers of the closed border in terms of collapsing production value chain.

Observers say the claims by both the Nigerian Customs Service (NCS) and Nigerian Immigration Service (NIS) that the border was not officially closed, but is under serious scrutiny because of ongoing Joint Agency Drills at the border.

Both agencies failed to answer the question of why it should not be taken as border closure when there is no form of vehicular movement across the posts.

Analysts say shutting down the border on grounds of rice smuggling simply means that the security agencies have failed in their duties to check influx of restricted products across the border after all.

This analogy further forced Yusuf to query why the complacencies and recklessness of border security agencies should be visited on genuine manufacturers and businesses relying on ECOWAS treaty to do their business.

Besides, checks across several trading groups at the Lagos International Trade Fair Complex on Monday showed scores of loaded and stationary heavy duty trucks meant for the West Coast but was helpless due to the border closure.

Sources within the Customs high command confided in Business Hilights on Monday that the border will be opened after the 20-day joint drill by security agencies.

The usually confident source revealed that the exercise code-named, ‘Ex-Swift Response’ and tipped to last for twenty-eight days, is jointly conducted by the customs, immigration, police and other military personnel and coordinated by the Office of the National Security Adviser (NSA).