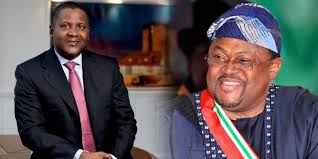 Latest richest peoples rating by the Bloomberg Billionaires Index (BBI), has revealed that in Africa, only seven investment moguls make the list of 500 richest people lead by Nigeria’s Aliko Dangote and Mike Adenuga.
Whereas Egyptian brothers; Nassef and Naguib Sawiris made the list, South Africa is the only other country in the sub-Saharan part of the continent with any representatives on the Bloomberg wealth ranking.
Its three wealthiest citizens including De Beers heir Nicky Oppenheimer, luxury tycoon Johann Rupert and property and wholesaling mogul Natie Kirsh, worth about $20 billion combined. All three have extensive holdings outside Africa.
By comparison, China, with a population that rivals Africa’s, has 44 on the BBI list.
The report published Wednesday in New York by Devon Pendleton and Tom Metcalf, revealed that Aliko Dangote’s $17 billion net worth makes the Nigerian the richest person in Africa and the only member of the BBI from one of the 60 poorest countries.
Recall that Nigeria, having overtaken India in poverty level of citizens, is currently the poverty capital of the world.
About half of Nigeria’s 190.9 million citizens subside on less than $1.90 a day, giving it a Gini coefficient (a measure of wealth distribution) of 48.8, compared with 41.5 for the U.S. and 29.2 for Sweden.
Dangote, 61, is among just a few Nigerian billionaires, most of whom accrued their wealth by coming into possession of lucrative oil blocks or, in the case of telecom magnate Mike Adenuga, providing services to a fast-growing population. Adenuga, the nation’s second-richest person, owns mobile phone network Globacom Ltd., with 45 million subscribers. He’s worth $2.8 billion, according to the Bloomberg wealth index.
However, the report claimed that though Dangote’s $17 billion fortune is a startling figure in such a poor country like Nigeria, his wealth in proportion to the size of Nigeria’s economy is on par with or even lower than the richest citizens of more developed countries.

Any deal with Atiku for 2023 will upset north-south understanding