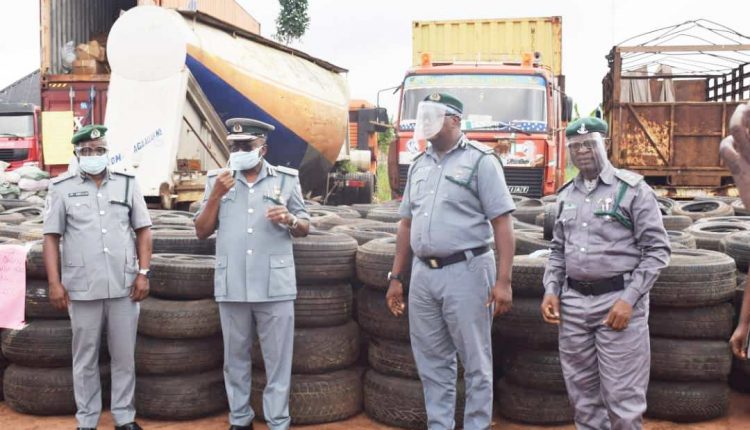 The doggedness of operatives of the Nigeria Customs Service Federal Operations Unit Zone ‘C’ Owerri, covering the Benin axis, has continued to pay off with seizures of 10,080 pieces of used tyres, 205 bales of second hand clothing, used bags, rubber slippers and exotic cars amongst others, with  duty paid value of N351, 404,000.

The Customs Area Controller Comptroller Olusemire Kayode who made this disclosure yesterday at a press briefing in Edo State said patrol teams covering the axis made an avalanche of seizures from March to date along Benin-Shagamu road and along Oluku Ondo state road. The seizures he said have been deposited at government warehouse Aduwawa Benin, Edo State.

He praised the tenacity of his officers in thwarting the activities of smugglers in the area known for high smuggling activities into the South East and South South zone adding that their hard work complements the efforts of officers at the port and neighbouring zones. He explained that the Unit is witnessing a gradual rise in smuggling of tyres and other commodities against rice as the war on rice smuggling has been yielding the desired results.

“We have a container from Lagos carrying these tyres. They were able to evade the eagle eye of officers on the road but when they entered our zone we picked it up. We have 7120 pieces of used tyres in the container. We have 205 bales of second hand clothing. We have rubber slippers, you name it we have virtually all things. Look at the number of cars we have picked up. Smugglers have devised so many means to evade detection but it is already known to them that the service is ready and we are on their tail, anywhere they pass through we will catch up with them. If they beat detection at Idiroko, beat Seme, even beat detection from Apapa or Tincan we are there manning the flank for them and we will still pick them up,” he said.

He added that 2960 pieces of used tyres were also seized in a separate bust, warning that the FRSC has attributed 44 percent of road traffic accidents to the use of second-hand tyres and urged motorists to listen to the advocacy and pleas of the government and buy new tyres for their vehicles.

While displaying high end cars seized in the Benin axis Comptroller Olusemire said the daredevil smugglers of one of the cars tried to evade detection by using a police spy plate number which on inspection was found to be fake. He also strongly condemned the importation of second-hand clothes, bags, rubber slippers and other prohibited items saying that they were classified as absolute prohibitions by the federal government because such items endanger and negatively exploit the health and safety of our nation.

“Rubber slippers can be manufactured in Nigeria. If you go to Aba they are manufacturing rubber slippers and bags so why would someone go to China and bring in rubber slippers and used bags for ladies? We should discourage ourselves from these and learn the habit of using what we produce in Nigeria,” he urged. He called on smugglers not to contribute to the death of the economy and called on all Nigerians to contribute to the growth of the economy by engaging in legitimate trade and business endeavours.

“When you get to the port pay your duty. When you are making your declaration declare what you are carrying, make sure you declare what you have. Open Form M for whatever you know you are bringing into the country. We should stop doing things that are inimical to our health and health of the country,” he declared adding that Nigerians should not harass officers in the discharge of their legitimate duties.

Gulf of Guinea, off West Africa accounts for 90% of 77 piracy cases—Report