Crossfire of claims between APC and Atiku Campaign group 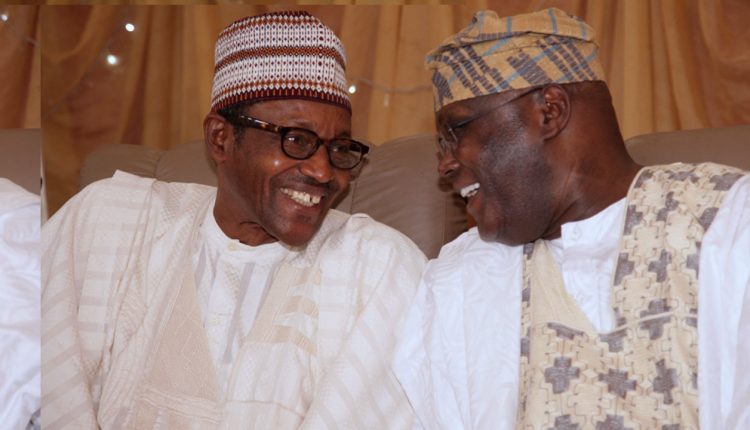 Atiku, The Presidency Is Not For Sale

The All Progressives Congress (APC) congratulates H.E. Alhaji Atiku Abubakar on his election as the Peoples Democratic Party (PDP) 2019 presidential candidate. This is in keeping with our belief in participatory democracy and the electorate’s right to freely choose from candidates in any political contest.
However, in assessing candidates to be voted for during elections, Nigerians will normally consider the candidate’s background and antecedents. The pertinent question to ask about Atiku is what his scorecard in public office was? Regrettably, Atiku’s scorecard is abysmally low and he has proven to be an untrustworthy and unreliable character. A case in point is Atiku’s revealing altercation with his former boss President Olusegun Obasanjo which exposed the level of corruption Atiku was enmeshed in.
In the international level, Atiku has been reportedly place on the global watch list of the United States of America and has avoided travelling to the US to avoid arrest and prosecution over a money-laundering and corruption case in that country.
Really, is this the character and antecedent of a candidate Nigerians will be proud to vote for as our President, come 2019?
Compared and contrasted with President Muhammadu Buhari consistent and principled stance on party affiliations, since 1999, Atiku has moved around different political parties – PDP, ACN, PDP, APC and now PDP, all in his blind and desperate pursuit of his ambition – The Presidency of Nigeria. It is therefore very clear that if Atiku loses the presidential election in 2019, he will again defect from the PDP to another political platform.
Atiku is known as a super rich Nigerian who entrenched the undemocratic practice of buying votes of delegates. During the APC National Convention in 2014, he spent several millions of dollars to buy delegates votes and emerged third, after Buhari and Rabiu Kwankwaso. On Sunday, he reportedly bought over virtually all the PDP delegates and was declared winner of the PDP presidential primaries. With these huge expenses expended to secure the PDP ticket, how will Atiku recoup his “investment” if not from the public treasury should he win the Presidency?
Our dear President Muhammadu Buhari does not spend a kobo on delegates as he banks only on his proven personal integrity. In any case how did a retired Customs Officer acquire so much wealth to fund his several presidential bids? The source of his wealth is very questionable and his financial resources are definitely ill-gotten.
Nigerians have had enough of corrupt, cash and carry politicians. That was why in 2015 they came out en masse and elected a clean and transparent man in Muhammadu Buhari to clean the Augean stable. The candidature of Atiku Abubakar will bring back the undesired lots and their practices which Nigerians have long rejected and forgotten.
The Nigerian electorate deserves to be given a choice of decency, integrity and honour and not dirt, corruption, and infamy. The choice between Buhari and Atiku is one between light and darkness; between positive change and business as usual; between transparency and under the table dealings.
“As we prepare for the forthcoming 2019 elections, one thing is clear. If the choice is between a presidential candidate/change agent who is rebuilding the country and refocusing our national priorities and attitudes on one hand, and another candidate who along with his gang of co-looters stole the country’s commonwealth and brought the country to its knees, that choice has already been made by the Nigerian electorate,” Yekini Nabena, Ag. National Publicity Secretary signed.

Abuja, Nigeria, 08 October, 2018: Our attention has been drawn to a statement released by the Buhari Campaign Organisation which cast aspersions on the emergence of His Excellency Atiku Abubakar as the Presidential candidate of the Peoples Democratic Party and suggested that his emergence was the result of money politics.
We are not surprised that there is confusion in the President’s camp. We expected that they would be thrown into a catatonic state knowing that HE Atiku Abubabakr’s emergence automatically means the coming end of their ignominious reign. That much was admitted by the President’s former running mate, Pastor Tunde Bakare when he praised the emergence of HE Atiku as an ‘Eagle’ and ‘a cosmopolitan wazobia’ politician. Obviously, Pastor Tunde Bakare has foreseen that the era of 97% versus 5% has come to an end with the emergence of the pan Nigerian Atiku Abubakar.
We ask how can the Buhari Campaign Organisation disparage the PDP Primary that produced His Excellency, Atiku Abubakar, when even the President’s own wife, Aisha Buhari, has condemned the APC’s primary? Not only did Mrs Buhari condemn APC’s primaries, she described them as ‘unfair’ and lacking in integrity. Who can know President Buhari better than his wife?
Eleven aspirants contested against His Excellency, Atiku Abubakar, during the Presidential primary of the PDP. Every single one of them accepted his victory. President Buhari was the only candidate cleared by the APC to contest its primary. Yet, a coalition of 5 aspirants is challenging his victory. That alone tells Nigerians his emergence is fraudulent.
Nigerians know that Atiku Abubakar is the most investigated politician in Nigeria and any smear by the Buhari administration remains just that. With the vindictiveness of President Buhari, he would have arrested HE Abubakar if he had been found wanting.
However, to set the record straight, we want to remind Nigerians that PDP’s primaries were genuine, free and fair. Atiku Abubakar got 1,532 votes in a contest televised live to millions of Nigerians. The All Progressives Congress’ primary, on the other hand, was a study in dictatorship and corruption. The sole candidate, Muhammadu Buhari, scored almost 15 million votes. How could that occur without rigging or manufacturing of faceless voters?
No wonder Transparency International rated Nigeria as more corrupt today under Buhari, than just three years ago when the PDP was in power. The scandals are too numerous, including the $25 billion NNPC contracts awarded without due process, the several padded budgets, the $41 million Ikoyi Apartment scandal, the recall, reinstatement and double promotion of pension thief and Buhari financier, Abdulrasheed Maina, the N200 million grass cutter scandal, and many others too numerous to mention.
The choice before Nigerians in 2019 is a simple one. Nigerians have a choice of electing a lively candidate with a record of providing 50,000 jobs to Nigerians in his private capacity versus the lifelessness (apologies to President Donald Trump) of a candidate under whom Nigeria lost 11 million jobs and became the world headquarters for extreme poverty.
Nigerians have a choice of a man who will provide an efficient and business-friendly solution to the herdsmen crisis and a man whose government said ‘giving land for cattle ranching is better than death’.
It is very obvious that faced with such a choice that Nigerians would definitely vote for the man who will Get Nigeria Working Again, hence we are not surprised by this desperate statement from the Buhari administration that is so shameless that they made a man implicated in framing a man of God on spurious charges as their spokesman. If he can lie against a man of God, should Nigerians believe anything he says about the PDP and its candidate?