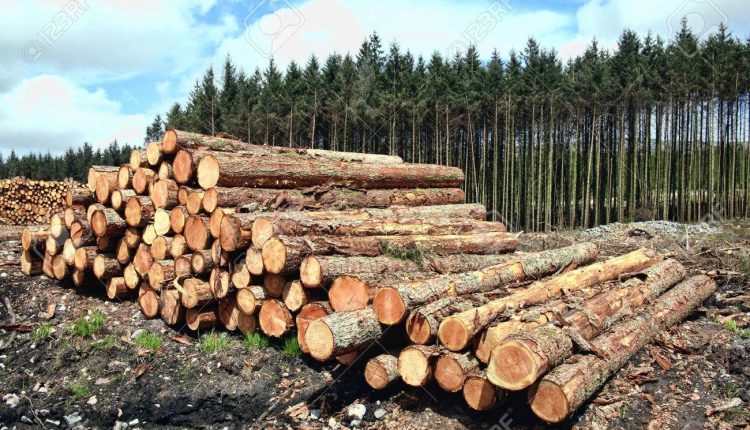 Investigations by Business Hilights Intelligence Unit (BHIU) have shown that illegal logging for endangered species are ongoing in forest parts of Ogun Edo and Ondo states in Nigeria for export to China in containers.
Also in Ghana, since the uncontrolled logging of rosewood for export mostly to China began in the Upper West Region of Ghana some three years ago, the impact is being felt in the mostly farming communities. Communities have started reporting erratic rainfall patterns, storms, poor harvests and bushfires.
In Ghana, timber resource allocation and harvesting are regulated by the Timber Resources Management Act, Act 547 of 1998 and the related Regulation LI 1649 of 1999.
For Rosewood, however, the issuance of permit to contractors prior to exploitation and monitoring exploitation once the permit has been issued has been the main regulatory mechanism since the surge in its export, the Forestry Commission says.
Checks in parts of Ore, Sagamu and Ijebu-Ode axis in the South West show that illegal logging and containerization are now on a daily basis on suspicious collaboration with locals and even relevant law enforcement officials.
Some of the operators who spoke to our undercover reporter revealed that the woods are containerized and illegally smuggled to China and other South-East Asia where they are used for wood works.
In an interview with Ogun Customs Command and a top official at Federal Operations Unit (FOU), Ikeja, they confirmed steady seizure of containerized woods billed for exports and assured that they will continue to track the perpetrators until zero logging is attained.
Giving a chilling analysis of the scenario in Ghana, Michael Asante a small-scale timber harvester operating in the Upper West Region of Ghana, said “Here we don’t have the rules that govern concessions, where one can only harvest wood from allocated concessions like in other parts of Ghana where timber is harvested. In this area, people harvest whatever, and wherever they can find rosewood.”
He averred that “Here, while the local people don’t know the value of the rosewood, no company operating in the area has permit to cut down trees; they only have permits to collect.”
Business Hilights Ghana Bureau chief recalls that even though there is currently a ban on felling rosewood trees in the region, there is evidence the law is being violated – fresh trees are being cut, and not many offenders are facing the law.
However, Asante who says he has been in the timber business for more than 10 years, believes that at the current rate of harvesting, rosewood will be gone from the region in three years, and he has a plan ‘B’.
It was discovered that whereas there are no official figures, the number of Chinese citizens in Ghana’s Upper West Region at any point in time is estimated around 150. Local people say they are financing and supplying chainsaw machines and other wood processing equipment for local tree hunters.
Currently, China’s lust for rosewood is growing in West African rainforest region and the illegal exploitation had been captured at a Briefing for the 66th meeting of the Convention on International Trade in Endangered Species of Wild Fauna and Flora (CITES) standing committee in January 2016.
The report revealed through a year-by-year comparison of Chinese import data indicates that West Africa has experienced a wave of boom-and bust Hongmu (rare and valuable “red wood” used primarily for antique-style furniture in China) trade cycles. The first country affected by increased rosewood exploitation was Gambia (2011-12), followed by Benin (2012-13) and Côte d’Ivoire (2013-14), Ghana (2013-14) and Nigeria (2014-15).
Also, Hongmu exports from West Africa have grown more than 1,000 fold between 2010 and 2015. West Africa is now the world’s leading hongmu-producing region by volume. The main species is Pterocarpus erinaceus, known as “Kosso,” found in the dry forests of West Africa, where the unsustainable harvest increases the risk of desertification. In Senegal’s Casamance region, the rosewood trade has fueled rebel activities through the smuggling of Kosso to neighboring Gambia.