Atiku kicks off campaign with mammoth crowd in Sokoto, pledges to fix Nigeria 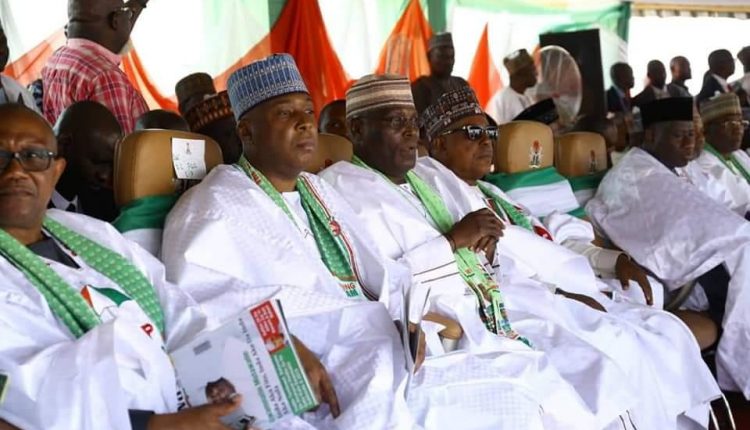 The Presidential candidate of the Peoples Democratic Party (PDP), former Vice President Atiku Abukakar and his running mate, on Monday kicked off their presidential campaign in Sokoto State with strong assurance to fix the economy and divisions amongst Nigerians.
He however regretted the reported deaths of 50 policemen in Zamfara state at the hands of bandits, saying “It is painful that those who have dedicated their lives to securing Nigeria are being cut down in their prime”. He condoles with their families and survivors and prays that God grants them fortitude and strength at such a trying time.
He said “Coming so soon after the heavy losses sustained by the Nigerian Army at the hands of Boko Haram in Metele, Borno State, this new casualty figure is a red flag that calls for immediate and decisive action on the part of the leadership of Nigeria”.
Atiku Abukakar therefore calls for a state of emergency to be declared not in Borno or Zamfara, but in financing the military and security services. He calls for an immediate allocation of at least $1 billion to go towards arming and training our military, police and other security agencies as well as providing improved service conditions for the officers and men at the frontlines of the war on terror and criminality.
Besides, he moved for a comprehensive insurance program for all officers and men of our military and security services such that if they are injured and killed in service, their family receives a sum equal to 10 years salary and allowances.

Earlier in his welcome address, the Sokoto State Governor, Aminu Tambuwal, said Nigeria is in dire need of new narrative in economy, security and national peace process to heal the wounds of almost four years of motionless movement in Nigeria.
Going further, Atiku Abubakar also posited that the emergency should allow families of soldiers and policemen killed in service to be allowed to remain in their official quarters for as long as is reasonably possible for them to get alternative accommodation and that a special agency be set up to help them in that process.
Also, the PDP candidate called for a comprehensive probe into the disbursements of the $1 billion special security budget that was withdrawn from the Excess Crude Account by the current administration in January of 2018. The nation is not getting value for money as there has not been a commensurate improvement in the weaponry and conditions of service of our troops since that withdrawal was made.
He further called for a 7 days period of national mourning, for flags to be flown at half mast and for national awards to be given to these fallen heroes who should be given heroes funerals. It is the least we can do for those who gave their lives that we might have ours.
“No more must we continue to read of the deaths of our heroes. Serving Nigeria must be a thing of sacrifice and pride, not a suicide mission. If we must send men and women to protect us, we must protect them by giving them the very best training and weaponry money can buy,” Atiku averred.

Diamond Bank outsmarts collapse as it downgrades self to national bank