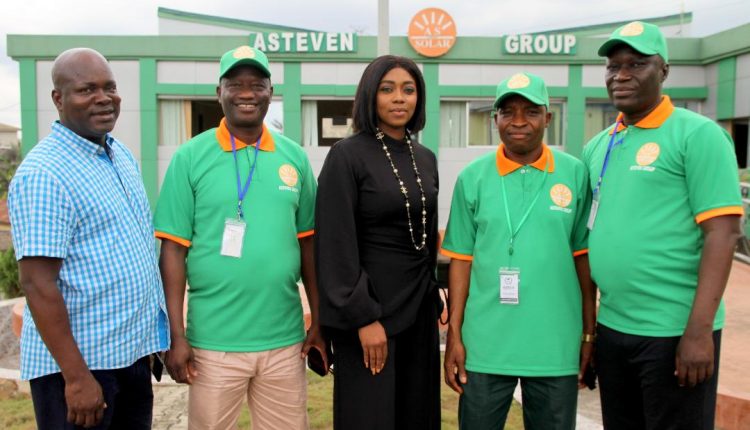 Kwara State government has partnered with Asteven Energy Group through its Renewable Energy Academy (REA) to develop technical capacity for the state’s energy ministry staff. This is even as the State has become the toast of the African Energy Industry and indeed, global energy space with the commissioning of the first ever solar farm tunnels in Sub-saharan Africa, which were handed over to the state, this January.

“We want to make Kwara the energy capital of Nigeria”. Bold Statement from the Executive Governor of Kwara State, Nigeria, Alh. Abdulrazak Abdulrahman. And he’s living up to that statement.

Indeed, it is a laudable innovation, coming out from Africa, as these tunnels are a testament to the ingenuity and technical expertise of indigenous companies operating in the energy sector.

For us, according to Kabir Shagaya, ‘It was all about creating and providing energy without disturbing the social landscape and the Solar Farm Tunnel project answered all our questions. A PPP project, since its completion, it has enhanced security along those corridors, there’s 24/7 lighting, increased social activities and better awareness of the benefits of solar energy’, concluded Shagaya, incidentally the Technical Assistant on Investment to the Kwara State Governor.

Shagaya, who is also the Director General of the states bureau on public-private partnership (KP3), also called for increased collaboration, stating he was amazed at the built up capacity of Asteven Energy Group. He also reiterated the kwara state government’s support to work on more social impact projects, thereby creating jobs and developing technical skills of youths in Kwara State.

“We wanted something different that would bring about social impact and enhance the energy landscape in Kwara State’ says  Kabir Shagaya, Technical Assistant of KP3, Project Owners.

And it does seem that Kwara State has pulled it off with the Solar Farm Tunnel (SFT).

The SFT is an innovative project, a component of the award-winning ‘Light Up Kwara’ (LUK) Project which was conceived to transform the State through deployment of Solar Lighting Installations.

The Solar Farm Tunnel consists of three interconnected fully built up Road Tunnels, with 1,580 pieces of 260watts roof mounted solar panels with a combined energy output of 384.8 kilowatts (Kw), the single largest 100percent solar power installation in Nigeria currently. The tunnels, together, provide power for over 2000 streetlights (including rehabilitation of moribund streetlights with led heads and installation of over 1000 double-arm streetlights), power for adjourning market hubs and increased security along those corridors, spanning 25.57 kilometers.

An innovative quirk is that the tunnels act as power sources and receptacles for advertisement boards and also as strategic direction landmarks.

Conceived by Asteven Energy Consortium, the Solar Farm Tunnel remains a signpost of local content capacity as it was fully designed, fabricated and installed by indigenous engineers. Of particular note is that the Quality Control and Standardised equipment tests were fully automated and ISO certified.

From the panels to the bulbs, the batteries, inverter systems, cables and control/measurement systems; all were subjected to continuous and very rigorous testing to ensure only the best materials and products were used. Also, real time maintenance and monitoring of the installations were embarked on from project completion till hand-over.

In his remarks, Dr Sunny Akpoyibo, CEO of Asteven Group, said “Our vision is to eradicate energy poverty out of Nigeria completely, and become the leading engine for innovation and entrepreneurship in the renewable energy sector’. This project signifies our vision. And that is capacity, social impact and enduring infrastructure development.

Akpoyibo, the project underwent challenges ranging from public apathy due to disbelief in solar energy; integrating various stakeholder groups into the concept development and assuring both the state government and investors of the project’s feasibility. All of which were surmounted due mostly to the vision of sustainability which led the project’s development.

That vision of Sustainability led to the training of top executives and technical staff of the Kwara State Ministry of Energy and the Bureau of Public Procurement (KP3), at the Asteven Renewable Energy Academy (ASREA). The training is to complement the site training of youths and ministry staff during the course of the project development; then providing enhanced technical skillsets to the ministry staff. This is to enable them undertake management of the Solar Farm Tunnel, equip them with technical knowledge on such future developments within Kwara State and showcase the invested capacity of Asteven Energy as arguably, the largest indigenous green energy company in Nigeria.

The training also comprised of a facility tour, an assessment of the various equipment and tools to ensure quality control and standards the company owns, and as well, an appreciation of the invested stock of products which enables Asteven to quickly deploy, install, troubleshoot or repair any part or component of their products or utilised devices at a moment’s notice.

‘We have actually seen the capacity Asteven Energy maintains and we are doubly assured that we took the right decision, borne out by the hand-over of the Solar Farm Tunnels, to partner with the company to develop those tunnels’. Mr Banigbe Rotimi Williams, Permanent Secretary, Ministry of Energy, Kwara State.