Ararume hits back at Okorocha, says ‘Only God, Imo people can decide my fate in 2019’ 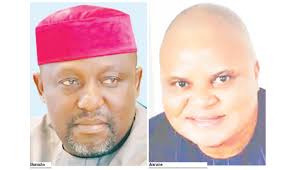 Regular gubernatorial contestant in Imo State since 2007, All Progressives Congress (APC) chieftain and 2019 governorship aspirant, Senator Ifeanyi Araraume, has officially responded to a recent comment credited to the State Governor, Owelle Rochas Okorocha, saying “Only God and the people of Imo can determine his fate in his ambition to become governor of the State in 2019”.

Governor Okorocha had in a public function vowed to retire Araraume, amongst other political bigwigs in Imo politics, after next year’s general elections.

However, in swift response, Ararume’s Special Adviser on Media, Mr. Ik Ogbonna, said in a statement that “We are not used to joining issues with anyone, Governor Okorocha inclusive, but, it is instructive to say that my principal, Senator Ifeanyi Araraume, has clearly said Okorocha is not God, and that all powers belong to God”.

“Senator Araraume’s ambition, business, life and future rests, squarely, in the hands of God. As a Christian and Knight of the Catholic Church, he is mindful of the role of God Almighty, in the affairs of men and, therefore, in all his dealings (public and private), he acknowledges the preeminence and ultimate authority of God.

Araraume claimed in the statement that Okorocha was still “struggling to make ends meet” as at 1988 when he was state treasurer of Liberal Convention Party in the old Imo State comprising Imo. He recalled that in 1999, himself, Chief Evan Enwerem and Okorocha won tickets to vie for senatorial seats, under the platform of People’s Democratic Party (PDP), but, whereas he and Enwerem won their elections, Okorocha could not.

“Let me further state, that Senator Araraume started politics long before  Okorocha. As at 1988/89, when Okorocha was still struggling to make ends meet, Senator Araraume was the state treasurer of Liberal Convention Party in the old Imo State, comprising Imo, Abia and parts of Ebonyi State.

“From 1990-1993, he was a member of  National Republican Convention (NRC) National Finance Committee and State chairman of All People’s Party (APP) in 1998. This shows a well grounded politician and party man. In 1999, he, alongside late Chief Evan Enwerem and Okorocha were given senatorial tickets by the People’s Democratic Party (PDP); they all won except, Chief Okorocha. He went on to get a second term and has been actively involved in state and national politics.

“He is currently a Federal Commissioner, representing the Southeast, in the Nigeria Communications Commission (NCC). Senator Araraume has won all elections he has participated in, but was denied victory in some. As they say, God’s time is the best, and like President Muhammadu Buhari, who won on his fourth attempt, 2019 will be his fourthth attempt, and he will emerge victorious by the grace of God, the votes and goodwill of Imo people,” the statement added.

Araraume further claimed that while he is busy ensuring APC is on sound footing in Imo, Okorocha is on the other hand allegedly “hobnobbing with the Social Democratic Party (SDP) and dishing out portfolios to himself as Senator for Orlu, his in-law, as governor, himself, again, as president in 2023 and his deputy as Senator for Owerri, etc.”

He said Okorocha was declared winner of his last two elections after, allegedly, “failing severally, and only after supplementary or rerun elections were conducted.”

Imo political observers say the election that gave Okorocha victory in 2015 was with the active support of Araraume who hails from Okigwe zone while Okorocha is from Orlu zone of Imo State.

Already, political alignments are heating up in Imo State since Governor Okorocha declared that his in-law, Mr. Uche nwosu will succed him under the APC, but Osuh Leadership Forum (OLF) in Isiala Mbano Local Government of Imo State and other political groups are endorsing Senator Ifeanyichukwu Ararume as the sole candidate for party governorship in 2019.

Their decision stemmed from the way and manner Governor Okorocah had been parading Mr. Nwosu as the anointed flag-bearer of APC come next year’s general elections.

Atiku reacts to Buhari’s remarks, says I will never refer to Nigeria’s youths as lazy