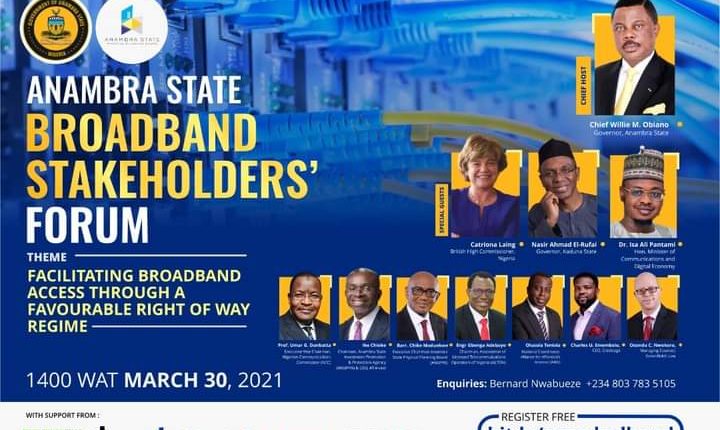 At 2.00 pm West Africa Time today (30th March 2021) a virtual conference will be hosted by the Government of Anambra State on FACILITATING BROADBAND ACCESS THROUGH A FAVOURABLE RIGHT OF WAY REGIME. Attendance is free but registration is required via bit.ly/ansg-brdband.

Let me provide a bit of background information. As many of us already know, studies (by World Bank, ITU, etc.) have revealed that an increase in broadband penetration produces appreciable increase in GDP, and by that fact possible improvement in economic growth and development.

Accordingly, in 2013, the Federal Government instituted a National Broadband Plan which lapsed in 2018. The target was to achieve at least 30 percent broadband penetration by 2018. By December 2018, broadband penetration was 31.48 percent (an equivalent to 60,087,199 broadband subscriptions to 3G and 4G). The Nigerian Communications Commission (NCC, where I work), has been the strategic driver of this process.

In demonstration of commitment to harnessing the benefits of broadband for socioeconomic development in a strategic manner, the Federal Government re-christened the Federal Ministry of Communications to Federal Ministry of Communications and Digital Economy (FMoCDE) in October 2019. The Ministry was mandated to produce a framework for Nigeria’s transformation into a fully digital economy. By my reckoning, and based on my interpretation of conceptualizations by the EU, the World Economic Forum and Group of Twenty (G20), a digital economy is one that drives capacity, demand, and supply – transactions in goods and services – through the Internet.

In November 2019, at the e-Nigeria Conference held at the International Conference Centre, Abuja, President Buhari unveiled a new policy framework for the promotion and the accomplishment of digital economy – National Digital Economy Policy and Strategy (NDEPS) 2020-2030.

Considering that broadband infrastructure is the lifeblood of the digital economy, the Minister of Communications and Digital Economy, Dr. Isa Ali Ibrahim Pantami, acting within the spirit of NDEPS, inaugurated a committee to produce a new national broadband plan.

On 17th March 2020, President Buhari presented the New National Broadband Plan, NNBP (2020-2025) to the public and stakeholders. The presentation took place at the Communications and Digital Economy Complex, Mbora District, Abuja.  The NNBP, which took oxygen from NDEPS, is conceived to “cover 90 percent of Nigerian population with broadband access and 70 percent broadband penetration by 2025”. The plan also focuses on achieving a broadband speed of 25 megabits per second (mbps) in urban areas and 10 Mbps in rural areas by the end of 2025. A Broadband Implementation Steering Committee (BISC) headquartered at NCC and chaired by Engr. UAS Maska, NCC’s Executive Commissioner Technical Services has been rallying multi-sectoral stakeholders to achieve the NNBP’s purpose.

In achieving the overarching objectives of the digital economy, the FMoCDE has also rallied state governments as key partners. Governors, led by HE Kayode Fayemi, Ph.D., Governor of Ekiti State and Chairman of the Nigerian Governors Forum, have taken steps to achieve the NNBP’s goals. One of the obstacles had been Right of Way (RoW) charges, which was pegged at N145 per linear meter by the National Economic Council. In view of challenges of implementation, state governments had to rededicate themselves to a robust and a more enabling RoW administration. Ekiti State ‘enacted’ an Executive Order in 2020, Kaduna, Imo, Kwara, Plateau, Sokoto, Katsina, Edo, Anambra and many other States have also made commitments to clement RoW administration and promotion of digital economy.

Since 2020, a series of conversations have commenced among Nigerian stakeholders and international partners to ensure that obstacles to achieving a quantifiable digital economy are addressed as quickly as possible. In August 2020, the UK Government through her Prosperity Fund Digital Access Programme, in collaboration with FMoCDE and NCC organised a study-based technical conference on RoW Administration and Issuance of Planning Permits for Masts and Towers. The States listed above and many other states participated at the conference.

Earlier this month, another study-based virtual conference on Bridging the Digital Divide for Underserved or Unserved Communities and PLWDs in a COVID-19 Context in Nigeria held through a strategic partnering among the British Government, FMoCDE and NCC. At that Conference, HE Godwin Obaseki, Governor of Edo State, made a presentation on policies, programmes and activities of Edo State Government in the context of the digital economy vision of the Government of Nigeria.

In the two conferences, where I had the honour to be the anchor/compere, the British Government delegation was led by the High Commissioner or the Deputy, while the Nigerian government’s team was led by the Minister of Communications and Digital Economy. The Executive Vice Chairman of NCC, Prof. Umar Danbatta also participated as well as all players in the telecom ecosystem. Many state governments, journalists and other communication professionals, and an array of social entrepreneurs also participated.

Tomorrow’s conference by Anambra State Government, driven by the State’s Physical Planning Board, is the very first by any state government in this regard. The Chief Host, HE Willie Obiano, is set to receive the Minister of Communications and Digital Economy, Dr. Isa Ali Pantami; Her Excellency Catriona Laing, British High Commissioner to Nigeria; HE Nasir El-Rufai, Governor of Kaduna State, who will share Kaduna State’s experience; Prof. Umar Danbatta and other stakeholders in the telecom ecosystem; as well as other enthusiasts, including Fargani Tambeayuk, Facebook’s Head of Connectivity Policy for Africa. Like its forerunners, I will also be the anchorman and compere for this conference.

*Dr Ibietan is a senior staff at NCC, Abuja