AKK would open up industrial activities in the northern corridor—Sylva, Kyari 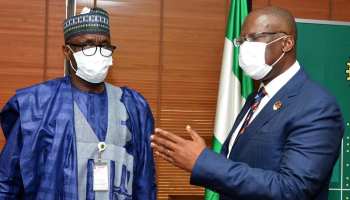 The Minister of State, Petroleum Resources, Chief Timipre Sylva has averred that on completion of the $2.8bn Ajaokuta-Kaduna-Kano (AKK) gas pipeline, there are clear chances of unlocking the industrial potentials and activities in the northern corridor.

Speaking during the virtual flag off of constriction activities on Tuesday, he said “We expect that in this corridor, a lot of investments will commence like fertiliser projects, gas industry, petrochemical, power plants and others.”

“On the part of this project, power plants will be built in Abuja and Kano,” he stated.

According to him, “NNPC is thus transitioning towards becoming an integrated energy company to support Mr. President’s economic diversification efforts,” the GMD noted in excitement.

Business Hilights recalls that earlier in his address at the virtual ceremony in Abuja, President Muhammadu Buhari had pointed out that the $2.8 billion (about N1.1 trillion) project, to be financed by a Chinese loan, would boost the nation’s energy capacity by nearly 4000 megawatts and generate over three million jobs.

He added that the undertaking would upscale domestic gas utilisation, uplift the textile industry, as well as address agricultural hiccups through the fertiliser and petrochemical sub-sector.

Ahead of the launch, the Department of Petroleum Resources (DPR) had said the country’s gas reserves as at January 1, 2020, were 203.16 trillion cubic feet (TCF).

The agency further revealed that being a component of the Trans-Nigeria Gas Pipeline (TNGP), with capacity to transport about 2.2 billion cubic feet of the product daily, the President charged the Kogi, Kaduna and FCT administrations to ensure the project was delivered within its two-year timeline.

He said “We promised the nation that we will expand the critical gas infrastructure in the country to promote the use of gas in the domestic market.

“These include the Escravos-Lagos Pipeline System – 2 (ELPS-2); Obiafu– Obrikom (OB3) pipeline; and the AKK.

“These projects are fundamental to our desire to industrialise and energise the entrepreneurial spirit that is ever-present in our population,” DPR boss stressed.