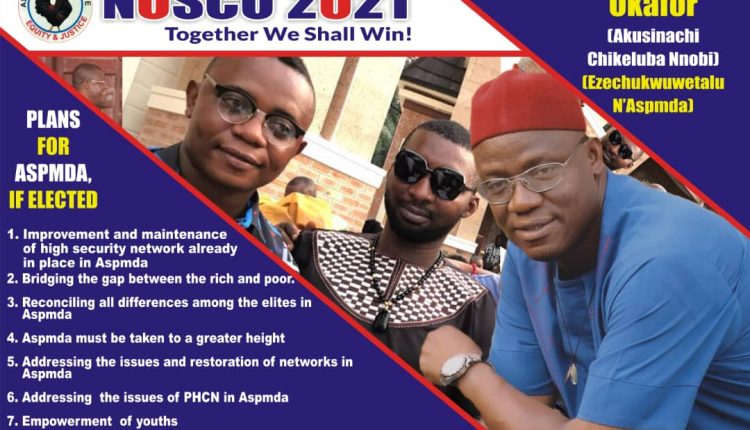 Greetings my good people of Aspmda,
To all ADM members,
I greet you all,
May we always find favour in the sight of Almighty Amen.
My ears are on ground and I have heard all my fellow contestants (in the upcoming Aspmda general elections) have said. I want to reiterate and let it be known to all on how ADM took out their time to produce me as the flag bearer/Candidate of supposed election which was truncated by some group of people.
Firstly the party (ADM) was open for anyone who wanted to contest. And to that effect, ADM (Aspmda Divine Mandate) had seven Aspirants which made it to conduct a primary so as to elect a flag bearer/ candidate in which I emerged. Before then, I have been going around the market, shop to shop, block to block soliciting for people’s vote. And till date, I arguably still remain the only candidate to have campaigned shop to shop at least twice. I and my group went round the whole market sensitizing on the need why they should vote me in. When I finally emerged as the flag bearer, we didn’t stop there. We continued our shop to shop, block to block campaign, we had a total of thirty three (33) rallies and three (3) mega rallies, two at main gate and one in Zone C, ADM is a party owned by numerous members of Aspmda. It is represented in all blocks and zones that comprise Aspmda. 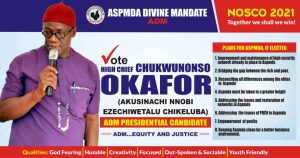 I wish to thank all who made all these happen. it’s wasn’t easy at all, unlike other parties that are owned by their Presidential Candidates. ADM was a party they couldn’t beat. Some prominent men in Aspmda who I won’t mention their names swore over their dead body that I won’t become Aspmda President and boasted openly about it. They did all they could to make sure that the election was truncated which happened in the week the election was supposed to take place. Even when Inspector general(IG) of police had instructed our former president to allow former Presidents, geopolitical zones and Aspirants to form INEC that will conduct the elections, they were not satisfied yet, I wish to illustrate with what happened in the Bible where two women gave birth, one killed her child while the other didn’t. The other later went out of envy and jealousy to drag for the child that is not hers, she requested that the baby be cut into two equal parts and share amongst them, the other lady cried out and said “no” that the child be given to her when she grows,we will know who her mother was. It took the wisdom of King Solomon to salvage the situation, this is the position of Aspmda Divine Mandate (ADM) today. We are only waiting for the election time/date & proceeds. Let the baby grow so that we will know her mother. ADM as a party are not trouble makers and therefore we cannot join hands with some people to cause mayhem in our dear market. 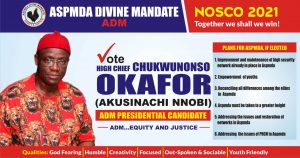 On Abuja issue, ADM was not part of the people that went to Abuja to truncate Aspmda general elections. The people that did it knows themselves, I was involved on a second trip to Abuja where we found ourselves at Sir Emeka Ofors residence who hosted us. After due consultations and meetings, Sir Emeka Ofor openly said that “he had found out that the Former president Dr DC Offorkansi actually wanted to conduct a free and fair election”. If not so, why would I (ADM presidential candidate) & my supporters spend so many resources on campaigning when I should know the election would be rigged in my favour; does that make any sense? I would have just calmly done a normal or minor campaigning knowing am still going to win no matter what happens. Why would my supporters and I be put into so much stress? And i still really want to thank my supporters for their tremendous love & support they have for my person till this day; that made the party pull some strings by having a massive campaign movement and we are still spending. You have rewarded me in an unmeasurable way. Furthermore, He (Sir Emeka Ofor) found out that the former president issued ID CARDS to all members of Aspmda without discrimination; Senator Patrick Ifeanyi Ubah agreed with him and said that he also found out that the election was programmed to be free and fair. It was when Sir E. Ofor found out the amount that was spent on taking former government to court and all other court Cases in Aspmda that marvelled him and said that “such amount shouldn’t be spent anymore” and requested for withdrawal of all court cases.
Finally, he made known to us that him Sir Emeka Ofor is only interested in the peace and harmony of Aspmda. He made it clear to us that Aspmda can’t make him wealthier than he already is.
*That he wants to restore back Aspmda harmony by taking off all cases Aspmda has in court*. That it saddens him when he hears how much money we spend in court when we can actually use them for better things and settle things amicably. Therefore he is not after the money. At some point Senator Ifeanyi Ubah had to ask if anyone has ever given him a penny in exchange of anything but the obvious answer was *”No”* rather he has been spending from his own pocket for the betterment of Aspmda. Sir E. Ofor then made it known that after elections nobody will find anything worth of going to court again. Why I am taking time to explain all these is for members of Aspmda to hear from me and know how we started and where we are. 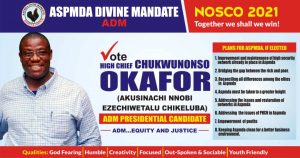 So far, I have aligned myself with the my party directives under the chairmanship of ogbuefi John Amaraegbu to comply with the current caretaker government. In which I have done to no complains by paying all my dues(Revenues and any bills inccured) to Aspmda. Which I believe it’s the right way to go. Take for instance if APC & PDP are having political disputes, neither party will ever urge anyone not to pay taxes because by doing so,it’s calling for anarchy. Which I will never be part of.
I have campaigned so hard till this day and I feel you should know by now that am a law abiding person.
Like I have always instructed my followers time and over again ” *ME BEING ELECTED AS ASPMDA PRESIDENT IS NOT WORTH THE DEATH OR BLOOD OF ANYONE*” if I loose, so be it. And if I win, I bless God. I, Chukwunonso C. Okafor, will never be part of victimization. I believe in procedure. I respect fair play.
Finally, I plead with all members of Aspmda to remain peaceful and law abiding and to show respect to a constituted authority, to all ADM members, let’s remain peaceful and await further directives from the party leadership as I will always say *“if you’re not a good follower, you cannot be a good leader”*, I am a product of a party and I will remain law abiding, let us continue to follow the directives of our leaders for peace to reign, slowly we shall get to our destination for *ITS IS GOD AND ONLY HIM ALONE THAT MAKETH A KING*!. We believe in supremacy of God almighty. I thank everyone making out his/time to go through this, I thank all members of Aspmda, my numerous supporters, the ones calling on phone and those who preach the good news about us (ADM). I thank everyone. Aspmda is our oil well, we cannot destroy it. May God continue to provide and protect us all. Amen 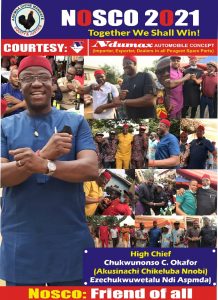 *N:B:* This address should have come on Friday 30th July 2021 but we decided not as a mark of respect and honour for late wife of AUM presidential candidate, Our brother Bro James Umeji , May God give him the fortitude to bear the great loss, Amen. He is in our prayers

May God bless us all. Amen

Atiku speaks on Dev., Nation-Building for Nigeria’s Future in Abuja